Next Monday begins Christmas in July at Quilter’s Dream.  And I have two, count them, two projects that need to be completed.  And not many more days for that to happen.  So just as soon as I finish this blog today, I’m all over the sewing.  And maybe by Sunday at 4 a.m. you’ll get to see the results.  Boo might be taking the pictures.

But first….. my family came to visit this week!  And although I was not a very good photographer, they were also not very willing subjects.  But I snuck in a few shots here and there.  It was a bit difficult because they spent the whole day yesterday doing one thing.  Wii Golf.  With Tiger.  Actually they were all Tiger.  It was hard to know whose score was whose.  They all said Tiger on the screen.  Wishful thinking on their part, don’t ya think?

This is Tiger Isaac taking his swing.  You can tell he’s swinging by the blurry hands.  I think he got a hole-in-one.  They all got at least one hole-in-one.  Apparently Wii Golf is way easier than the real thing.  I watched.  Didn’t want to mess up their hole-in-one statistics.

These girls watched too.  That’s niece, Jennifer on the left and sister, Cindy on the right.  We let the kids and the boys do the golfing.

Here’s Tiger Emma taking her “hit the ball out of the park” wind-up swing.  Oops!  Wrong sport.  She got a hole-in-one too.  And she’s a lefty.  Either that or she just happened to be standing on that side of the Big Screen Golf Course.  Better known as a TV.

Tiger Jeff takes his swing for a hole-in-one.  Notice how Tiger Isaac maintained his best seat in the house for viewing status.  He didn’t want to miss a single swing.

This picture makes me laugh.  Dear Tiger Hubby put his all into his swing and became one big blur as he smashed that little golf ball.  But the really funny part is the spectators.  They have absolutely no regard for the golfer.  Their eyes are totally fixed on the Big Screen Golf Course.  The golfer could crumble to a heap and need a paramedic and they wouldn’t even notice.  They would just wonder why nothing was happening on the Big Screen Golf Course.  I think On Screen Dear Tiger Hubby actually layed on the ground and kicked his feet after one swing.  Apparently he did not get a hole-in-one on that one.

Sis, Niece Jennifer, Great-Niece Emma and I took some time out to go to a movie in the afternoon.  The boys were in exactly the same spot when we got home.  Waiting for dinner.  Then back to the game.  They were on a Tiger Mission apparently.  A Mission for just one more hole-in-one.  Then Sis, Niece Jennifer and I went to the Beauty Shop for Niece Jennifer to get a haircut. 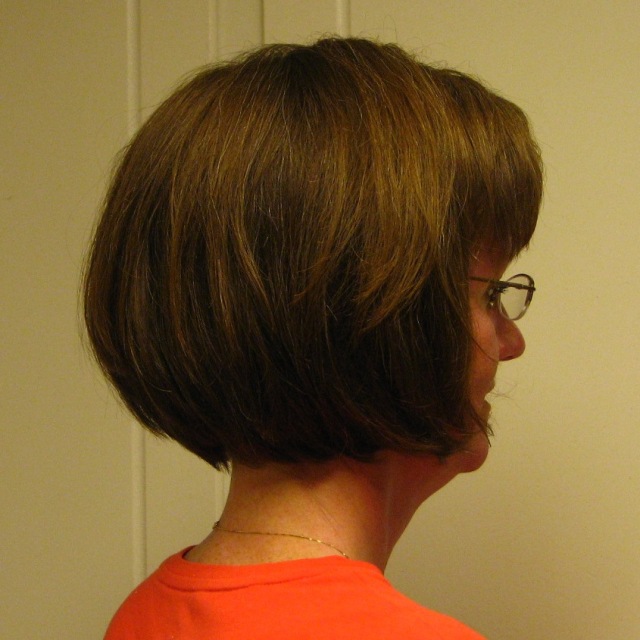 Isn’t it cute?  She has great hair.  I wish she could share some with me.

Then before they left for Colorado to visit Gram and Gramps, we had another visitor. 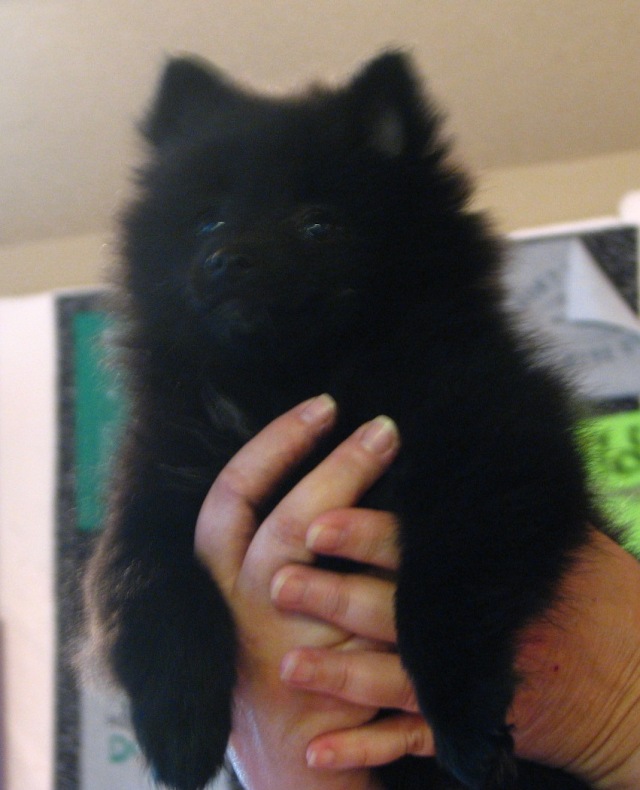 Meet Dixie.  Sorry she’s a bit blurry.  We need to get new animals in our family that are not black.  They would be more photogenic.  But apparently we like black pets.

Boo wasn’t quite sure what to do about Dixie. 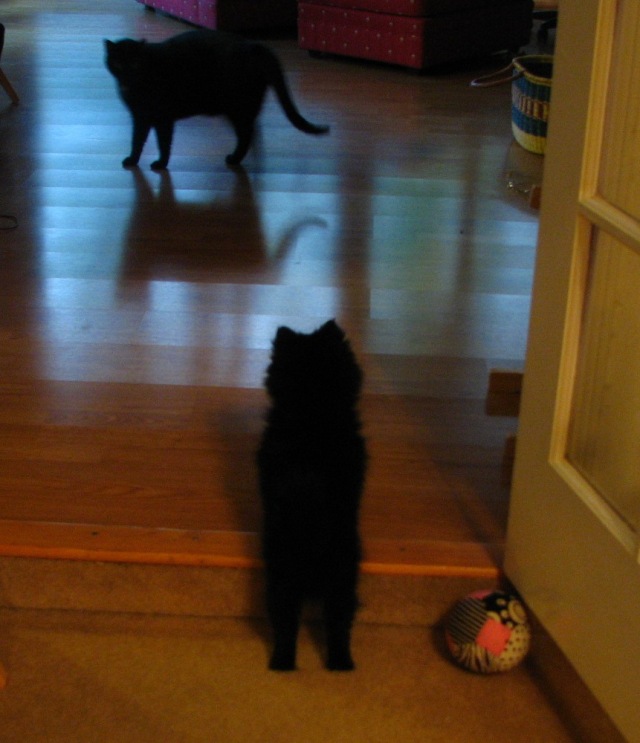 But Dixie sort of thought she wanted to play with the big, black animal.

And she definitely wanted to play with all the animal’s toys!

And after Boo cleared his throat a few times and tried to bop Dixie on the nose, Dixie gave up and just played with every cat toy in the house while Boo watched.  By the way Dixie belongs to my other sis, who came over to meet the travelers and they all headed to Colorado to visit the folks. 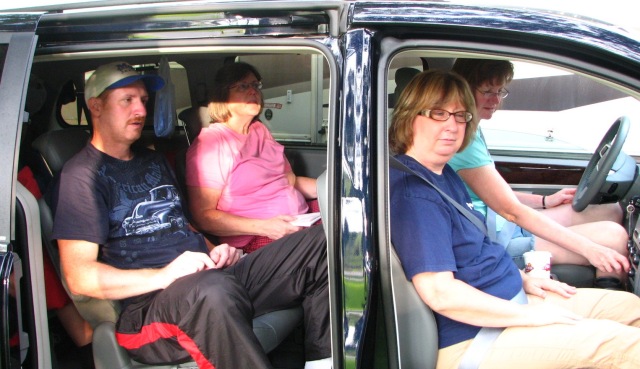 Don’t they look extremely excited for a 13 hour drive?  Not. 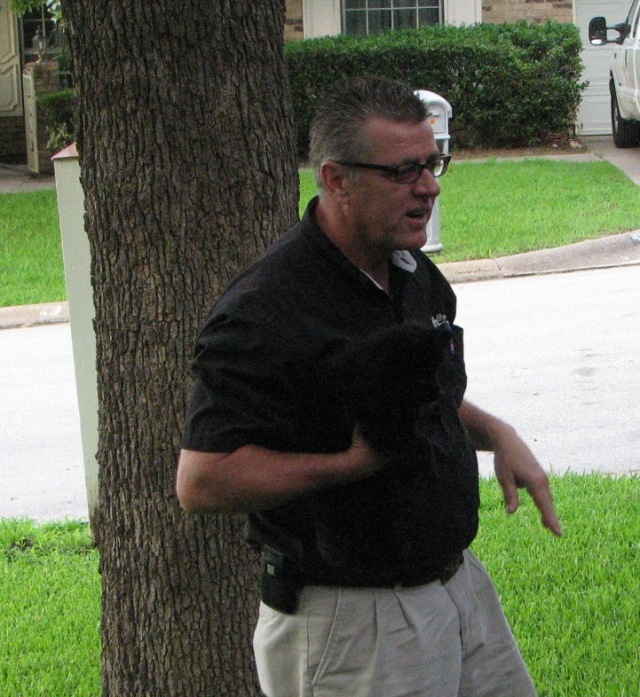 Bro-in-law Jim is banned from ever wearing a black shirt while holding Dixie again.  At least for the sake of the pictures that is. 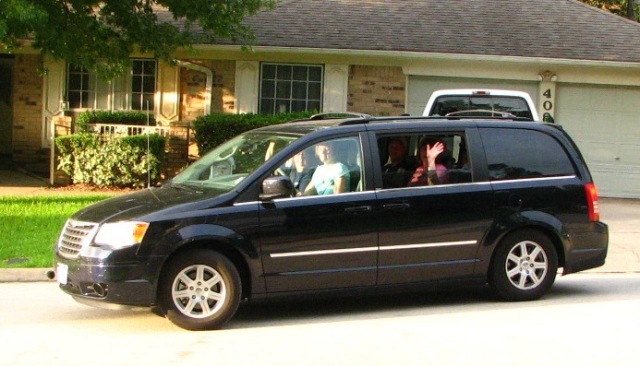 Bye everyone!  I am very happy to have projects that are keeping me at home this week.  I don’t treasure 13 hour drives with 6 other people in a van. 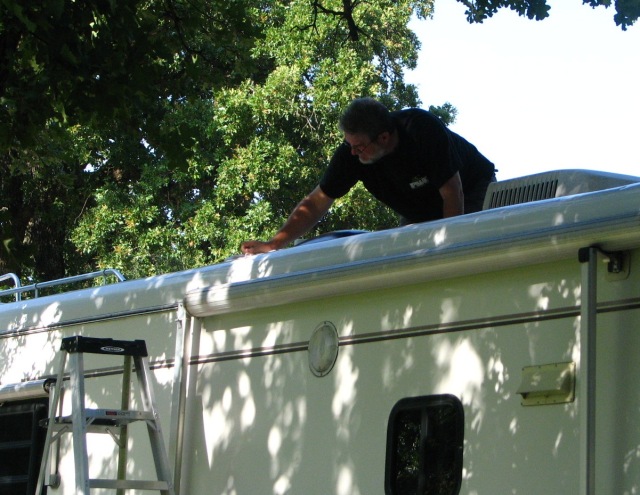 I prefer a larger mode of travel.  And Dear Hubby is repairing the roof so this one doesn’t leak any rain water on us.  “Good job, DH!”

Dixie says bye too.  And I’m gonna work on finding a camera setting for “black furry subjects.”  I’m sure there’s one on the camera somewhere.

Sewing away while the rest of them ride in a van,
Barb

This entry was posted in Boo, just stuff and tagged cats, dogs, family. Bookmark the permalink.