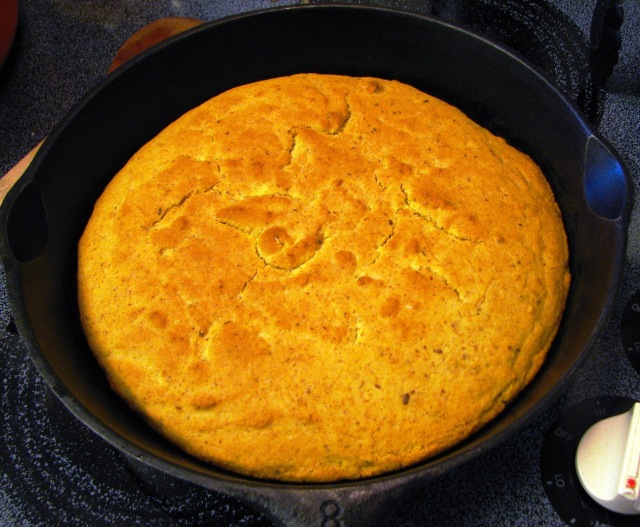 Vegan cornbread.  I’ve made it 329 times in the last month.  Dear Hubby now runs screaming to pick up fast food when I announce cornbread for dinner.  I’m tweaking the recipe.  There have been a fair amount of readers asking for it so I wanted it to be just right.  I may tweak it again tomorrow.  Don’t tell Dear Hubby.  I’m working toward the perfect vegan cornbread.  It could take awhile.

For now you have to settle for what I’ve come up with at this point.  I’ll let you know if I come up with something better.

The first cornbread I made I ground the flaxseed and then boiled water on the stove and added the flax and simmered it for a few minutes.  It becomes a big gummy glob.  (I was following the recipe I found.)

See?  The finished cornbread was absolutely delicious.  So moist and yummy.

The second time I made it I forgot to add the gummy flaxseed at the appropriate time.  I had the cornbread in the iron skillet in the oven when I discovered my mistake.  Grabbed it out of the oven and threw it back in the bowl and added the flax and mixed it up and put it back in the oven.  (Yes, it had already begun cooking.)  It was still delicious.  And moist.  A bit flatter though.

It was then that I decided that the recipe was foolproof.  I read some comments on the recipe too.  And decided to incorporate some of them into my next attempt in what I’m now calling my test kitchen.  Deeelish.  And simpler without the gooey, gummy stuff.  Guess I should move forward and tell you how to make it, eh?

Update on 3/23/2012… I have made this many times now and decided that the best way to make it is with the gooey, gummy stuff.  So I’m updating this post to reflect the best cornbread in all my 8,423 attempts.  Updates are in red. 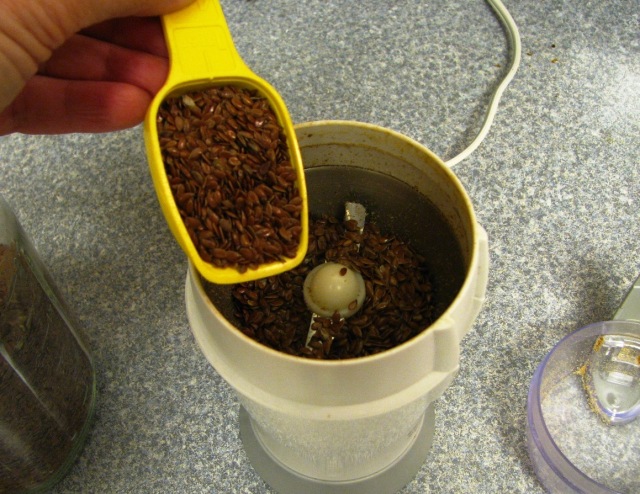 I have a coffee grinder specifically for flaxseed.  It’s very healthy.  Or so they tell me.  I add it to my oatmeal.   And it’s apparently important to grind it just before you eat it.

Here’s what it looks like all ground up.  Up close and personal.  I took the picture and you needed to see it.

So start by dumping all the dry ingredients into a bowl.

Nope.  Start by bringing 6 Tbsp of water to a boil.  Dump in the 2 Tbsp of ground flaxseed and simmer it, stirring occasionally, for 3 minutes.  Then dump all the dry ingredients into a bowl.  Or the food processor.  I’ve decided the food processor is the way to go with this stuff.

Flour, cornmeal, baking powder, salt, .  The day I took this picture I used whole wheat flour.  But I’ve also used unbleached flour and think I like it better.  Not as healthy, but a bit less dense of a cornbread.  You can use whatever you feel good about. 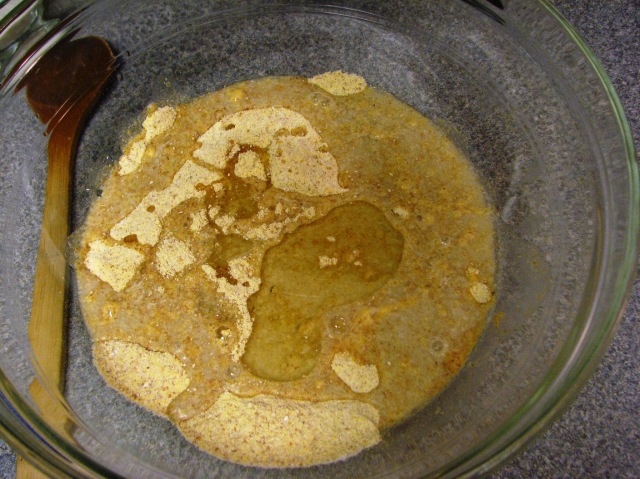 Then you add in all the wet ingredients: cooked flaxseed, agave, almond milk and oil.  Oh! I almost forgot.  One of the comments said to add a little apple cider vinegar to turn the milk into buttermilk.  So I added it to my almond milk.  It kind of curdles it.  Just close your eyes and pour it in.  It just might be the secret to the moistness.  But it’s perfectly fine and still very moist with just almond milk and no vinegar.  Discovered that in the 1,423rd attempt in my test kitchen.

Nope!  Pulse the food processor until all ingredients are incorporated together.  Much easier even if the clean-up is a bit more difficult.

This is what the batter looked like the first time I made the cornbread.

This is what yesterday’s looked like.  Both delicious and moist in the end.  Foolproof.  (The first one had the gooey, gummy, pre-cooked flaxseed.)

My batter is now somewhere in between what these two pics look like.  Not sure why that first one looks so stiff.

By the way, you should have preheated the oven to 425° and put the cast iron skillet in to heat.  Pretend I told you that earlier, OK?

Pull the skillet out of the oven.  Be sure to use hot pads – it will be very hot!  Add about a tablespoon of canola oil and swirl it around.  Then dump the batter into the skillet.  It will sizzle.  I love the sizzle.  A cast iron skillet is a wonderful thing for oven cornbread.  If you don’t have one, I guess you can use a baking pan.  But don’t blame me if yours isn’t as delicious.  Just sayin’. 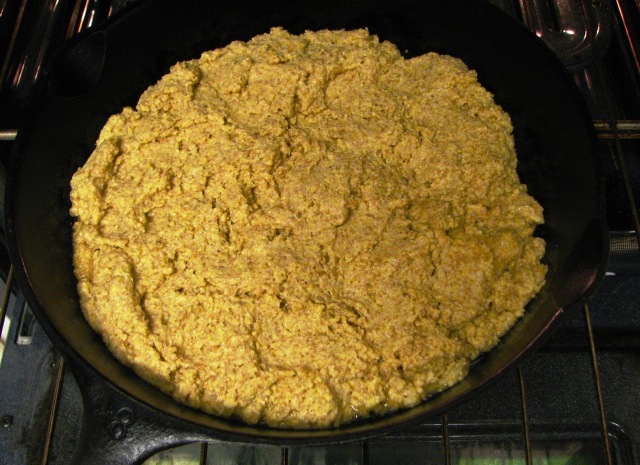 Cornbread #1 going into the oven. 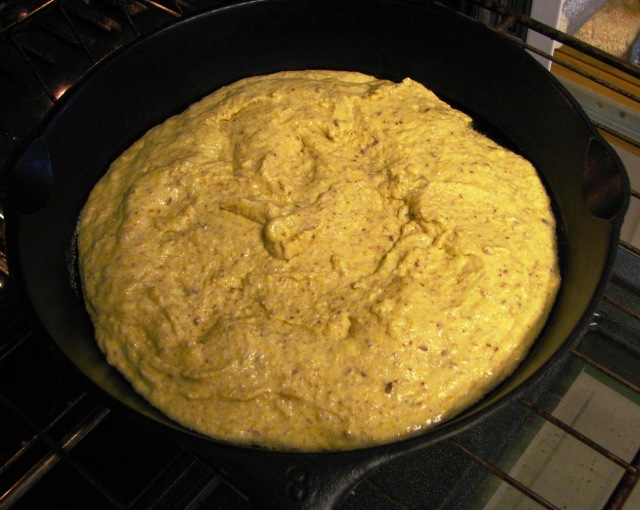 And now here’s your Immersion Blender Tip of the Day.  Fill your mixing bowl with water and immerse your blender and turn it on.  Cleans it right up.  Do not tell me if you have an immersion blender and discovered this little trick years ago.  I know, I know.  I’m behind the times.

Finished cornbread #2.  The messed up one.  Flatter.  But still very moist and delish.

Hey!  If you can put a recipe into the oven, discover that you forgot an ingredient, take it out, mix in the missing ingredient even though you can tell it had already gotten crusty around the edges, add more oil to the skillet in the oven and dump the batter back in and it still comes out spectacular and moist, I’d say it’s foolproof.  My kind of recipe.

Here’s the link to the printable recipe, which I’ve updated with the cooked flaxseed option:

The first time I made this I added a can of chopped green chilis.  I always add chopped green chilis now.  They really add to the cornbread.  I also think it would be great with some added shoepeg corn.  Chopped jalapenos maybe?  The original recipe had 1/4 c sugar.  I subbed the agave nectar to make it healthier.  Someone else suggested substituting applesauce for the oil.  It seems to be a very foolproof basic vegan recipe.

New pics of the process and the finished cornbread are in Vegan Cornbread Revisited.  Just in case you happened upon this older posting first!