The Best Meatloaf I Ever Made

A while back I did a post and told you that I’d had a mealoaf sandwich for lunch that day.  Just so happens it was a pretty good sandwich.  In fact, I told you that Dear Hubby declared it “The Best Meatloaf I’d Ever Made.”  Funny thing.  Many of you zeroed right in on that and couldn’t believe that somewhere in that post I didn’t include the recipe for the meatloaf!  So for today – your wish is my command.  Today is meatloaf recipe day!

Here are the ingredients…… 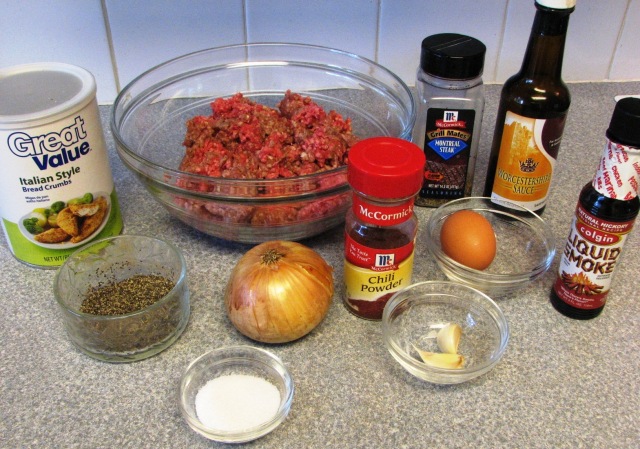 Ground beef, onion, garlic, Italian Style breadcrumbs, egg, Montreal steak seasoning, chili powder, worcester sauce, liquid smoke, salt & pepper.  I also have to admit.  The night that I made “The Best Meatloaf I Ever Made” I also added some carrots – chopped up real fine.  I forgot to add them when I re-made the recipe for you.  You might want to add them.  A good way to get extra veggies in your family’s diet.  Disguised, in case your kids don’t like carrots.

Instead – the night I did the remake I added these:

….green peppers.  I hesitated in putting this picture in the blog today, knowing that I have just lost my dear friend, Sally.  She despises any kind of peppers.  Can’t touch them.  Won’t eat anything they have touched on a plate.  OK, I exaggerated a bit with that last one.  I actually have seen her pick the peppers out of a dish.  But only if she’s really hungry and determined to eat said dish.  Sort of reminds me of my niece, Janna, who as I told you on Brownie day, doesn’t eat any kind of nuts.  Only then she left a comment and I found out that she does eat peanuts and cashews – but only alone, definitely not added to a recipe.  The things you find out by writing a blog!  Who knew?

Hang in there, Sally!  (And you really can just leave out the peppers.)

Chop up the onion.  I now use this technique from The Pioneer Woman for chopping onions.  The only thing I do differently is I lop off the top end before I cut the onion in half.  Then I can set the onion on the flat top to slice it in half.  More stable that way.  And I’d like to point out that by leaving the root end attached, you have something to hold onto while you chop.  Which, of course, this picture doesn’t show.  Because my other hand is holding the camera.  I had to tell you that just in case you couldn’t figure it out for yourself.  Didn’t know you were going to learn the fine art of chopping onions in a quilter’s blog, did ya?  Stick with me, schweetheart, and who knows what all you’ll learn. 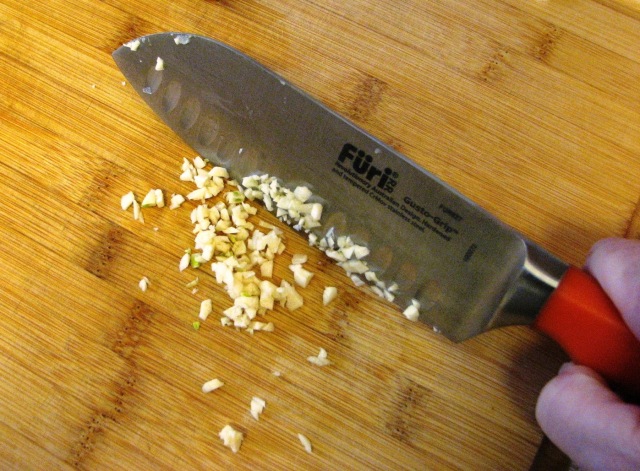 Then whack the garlic with the side of the knife to release the skin and peel it off.  Chop the garlic into fine little bits.  Or you could use a garlic press.  But then you wouldn’t be able to take out all your frustrations by whacking it.  If you haven’t done that before, you need to try it.  So much better to whack.  Just my humble opinion. 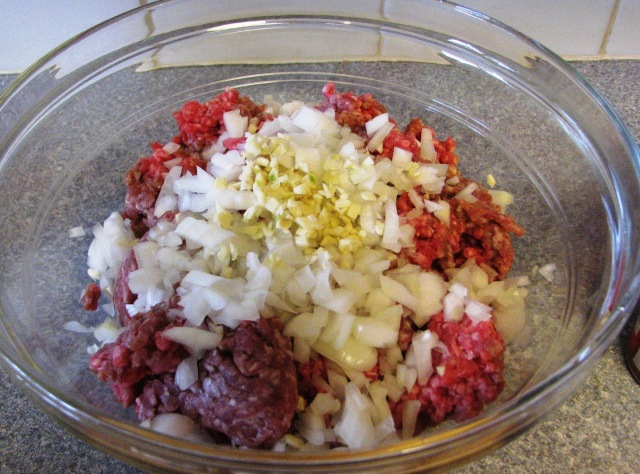 Dump the onions and garlic into the bowl with the ground beef.  I have, on occasion, used ground beef mixed with ground pork or even turkey for my meatloaf.  But for the “Best Meatloaf I Ever Made” I used only ground beef.  Perhaps Dear Hubby is just a beef lover?

From here on out I just dump the ingredients in the bowl…..

A palmful of steak seasoning.

And a palmful of chili powder.

An overflowing handful of Italian breadcrumbs.  See how it overflowed my hand into the bowl a bit?  These are important measurements!  Not.

About a tablespoon of Worcester Sauce…….. and notice I’ve added the egg too.  It is virtually impossible to take a picture of yourself cracking an egg into a bowl.  But when I perfect the art, you’ll be the first to know.

A couple of teaspoons of liquid smoke.  I hadn’t added this to meatloaf before, but think it might be the secret ingredient that made it so good.  And now I’ve shared that secret with you.  Lucky you.  By the way – I hope your scroll wheel on your mouse works really good so you can zip on down through the pictures if you want.  I took a million of them and apparently thought it very important that you saw them all. 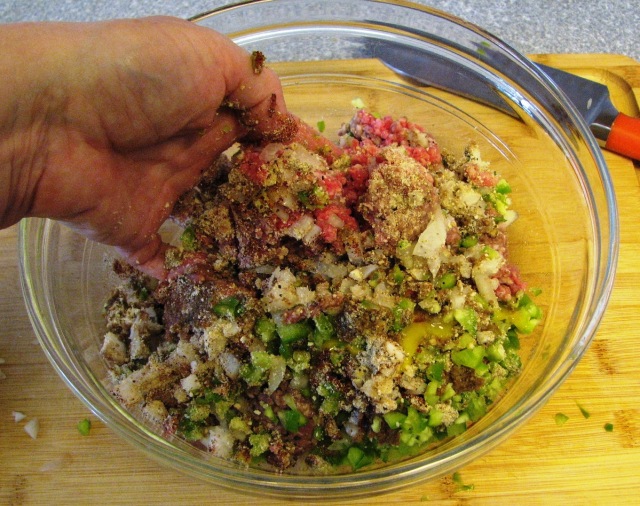 This is now the point where I dig my grubby little hands in and just mix this whole baby together.  OK, my hands weren’t grubby at all – I washed them carefully before diving in.  This is also just after the point where I decided to add the green peppers, as you can see.  Close your eyes, Sally and scroll past that picture quickly! 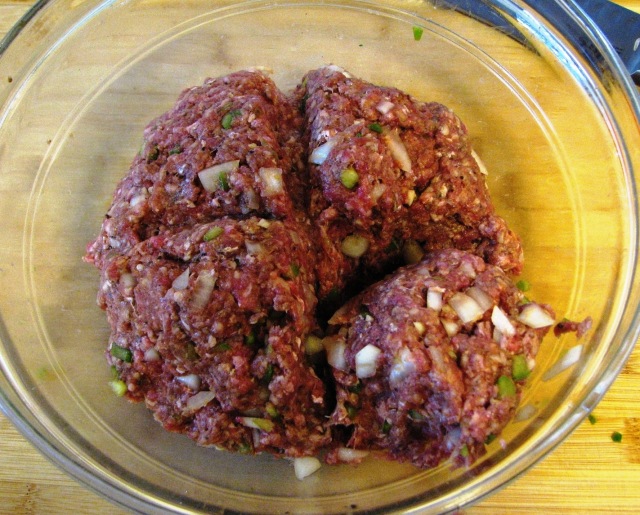 Here’s a little tip I learned from Rachael Ray.  She makes 4 little meatloaves instead of one big one so she can cook it faster.  She’s all about 30 minutes and all.  Well, I like them that way because I like having 4 individual sized ones so that each person gets more of the crispy outside edges.  If you score the meat in half and then half again, it divides more evenly and your loaves are more uniform in size.  Mine don’t ever come out exactly the same, but I hate it when I get to the end if I just scoop it out and the last one is a monster.  Then I have to decide if I want to make 5 instead, or add little bits to the other 3 to make them all even, etc. etc.  This little tip just works for me.  And now you can see if it works for you too!  (Works for hamburgers too…. any time you want to divide your ground meat evenly into four.)  I’m apparently all about the little tips today. 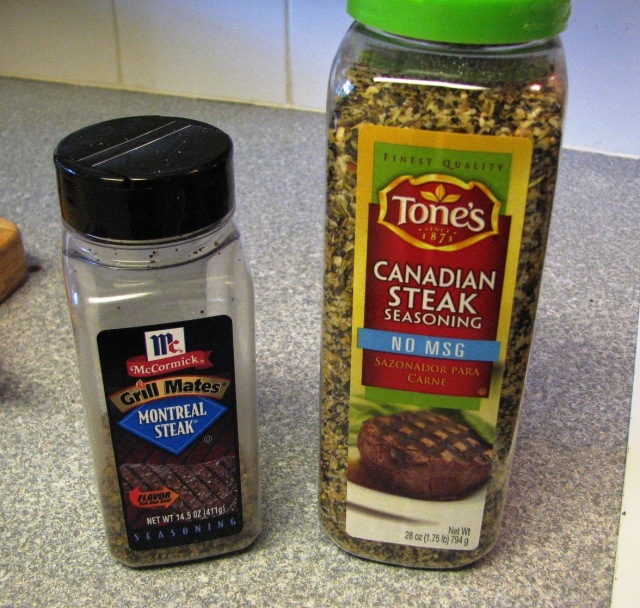 And what’s up with this?  I use a lot of this steak seasoning (sometimes called grill seasoning) so I bought the mega jar at the local warehouse store recently.  So is Canadian steak seasoning the same as Montreal seasoning or does all of Canada use something different than they do in the city of Montreal?  Inquiring minds really need to know these things!  Of course, I did not have the jar with me to compare ingredients when I purchased the big bottle – not that I cared.  They look about the same.  And I actually was pleased to know that there is NO MSG in the big one.  Not sure if there is in the other or not.  And I still haven’t compared the ingredients lists on the jars, so don’t ask.  Although now I’m going to have to because you will ask, won’t you?  And now I just can’t stand not knowing anyway.  I’ll let you know if I find out anything important when I check…… 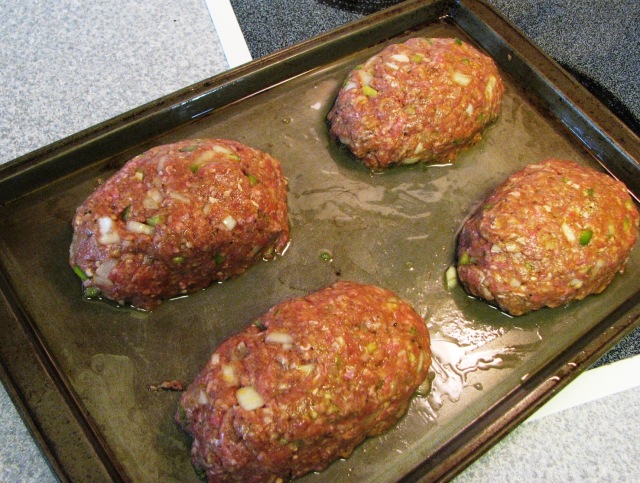 Here are the little loaves all ready for the oven.  I drizzle olive oil on the cookie sheet before I add them – and I sort of roll them around a bit to get the oil all over the tops too.

And here they are in all their deliciousness after they have come out of the oven.  I let them sit for just a bit before I put them on the plates and slice them up.

I served them with a bit of ketchup drizzled on top and a baked sweet potato on the side with butter, salt and pepper.  We are a ketchup-on-meatloaf family, but you wouldn’t have to add the ketchup.  In fact, I think the first time I made this meatloaf, I added a bit of tomato paste to the mix!  I can’t believe I forgot that this time!  And quite honestly, although Dear Hubby didn’t say so on the re-make for the blog, I think the meatloaf was a bit better that other time I made it.  This is the problem with meatloaf for me.  I just throw it together every time I make it!  However, when Hubby said it was the best ever, later that night I wrote down the ingredients.  But apparently I forgot to write tomato paste….sigh….  Now I know my friend Sally is going to say it was better the first time because it did not have green peppers.  But don’t believe her!  It was the lack of tomato paste, I’m sure.  So throw in two tablespoons of tomato paste in your meatloaf and it will be the best ever.  And now it’s forever included in this blog, so I won’t forget again either!  By the way – I buy it in the tube.  It’s very handy.  You can squeeze out the amount you need and store it in the fridge much easier and longer than the stuff in a can.  Just another tip for ya there…..

And although I love leftover meatloaf for just plain ol’ meatloaf sandwiches with ketchup slathered on, last night for dinner I decided to try something different.  Meatloaf is truly a double-duty meal at our house and I plan for leftovers.

I sliced up the meatloaf rather thin……

And put it on rye bread with swiss cheese slices.  I added a bit of dijon mustard – just a little – for a bit of zing to the flavor. 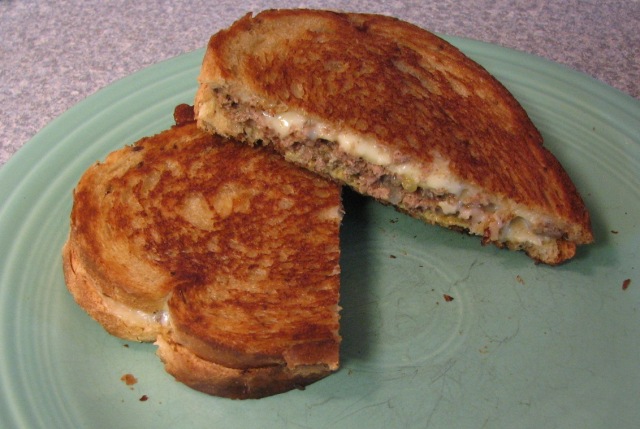 Here it is in all its yummy goodness.  It was sort of like a patty melt without the onions (although there were onions in the meatloaf.)  And some grilled onions on the sandwich would have been good too, now that I think about it.  Next time…..

And this was dessert.  Oh, man.  I had some strawberries that needed to be eaten.  And leftover fudge sauce from the Brownies a la mode we had at Suz’ last week.  That recipe is here.  It’s yummy no matter what you pour it over.  And easy, peazy!  And actually the above picture was Dear Hubby’s dessert……… 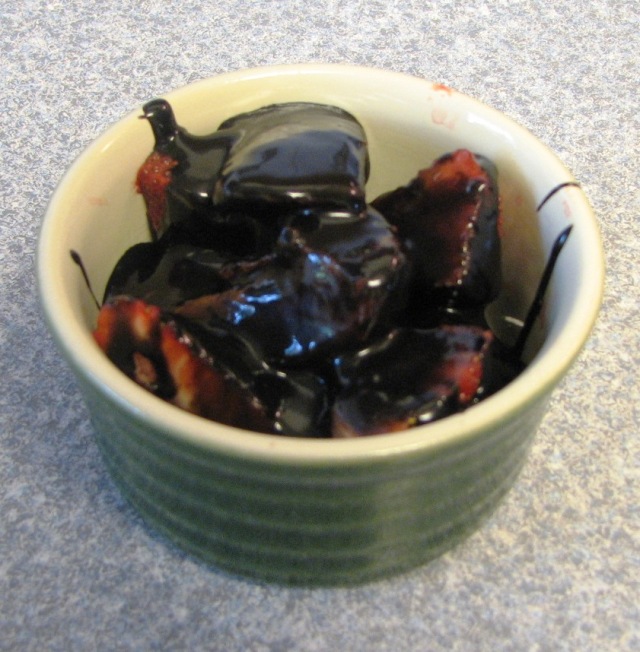 This one was mine.  I like a little strawberries with my chocolate.  In case you can’t tell, mine was swimming in fudge sauce.  Decadent.  But oh, so yummy.

Mix all together, divide into 4 loaves and bake at 400 degrees for 30-35 minutes.  Or if you prefer one big loaf, you’ll need to bake it for about an hour or so.

And now you have just read the longest meatloaf recipe in the history of mankind.  Amen.
Hugs,
Barb

This entry was posted in food, recipes and tagged chocolate, meatloaf, recipes. Bookmark the permalink.

14 Responses to The Best Meatloaf I Ever Made