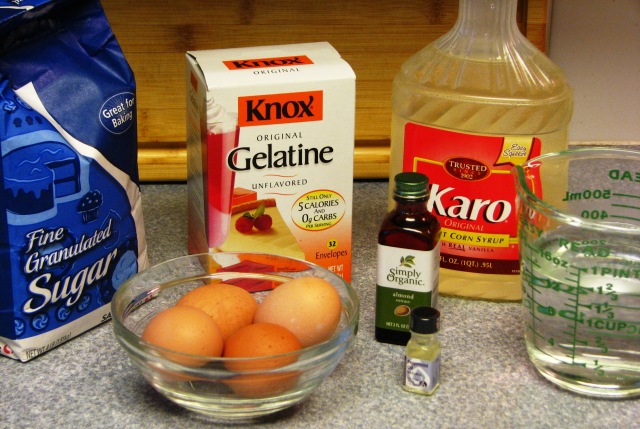 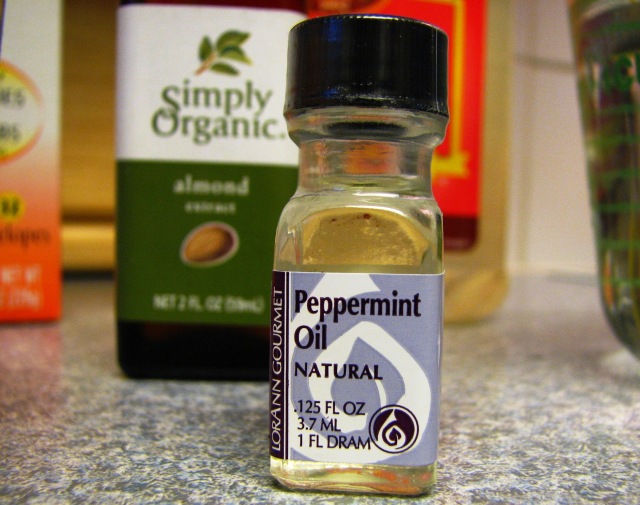 I used peppermint in the pink marshmallows you saw in the pic above.  They are fabulous in hot chocolate.  And yummy right out of the bowl.  Yummy.  Almond extract is good too.  Or you can just use plain ol’ vanilla.  But the almond gives them an unexpected zing.

Start by mixing 7-8 packages of unflavored gelatine with 1/2 cup hot water.  I used 7 and it seemed to be just right. 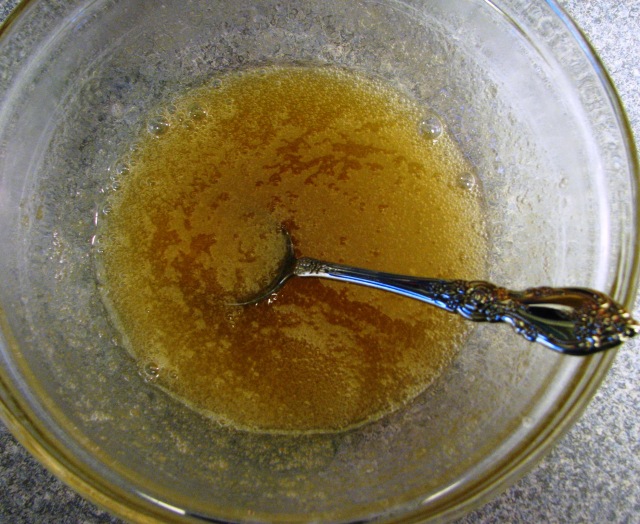 Stir until the gelatine is dissolved.  It will soon turn into a big blobby mess.  Don’t be alarmed.  That’s what it’s supposed to do.

Set the gelatine aside……. 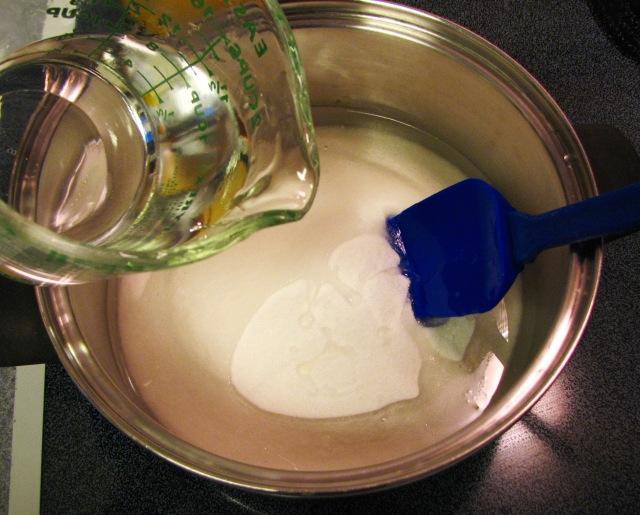 ………and in a heavy saucepan, stir together sugar, syrup and water over medium high heat.  Bring to a boil. 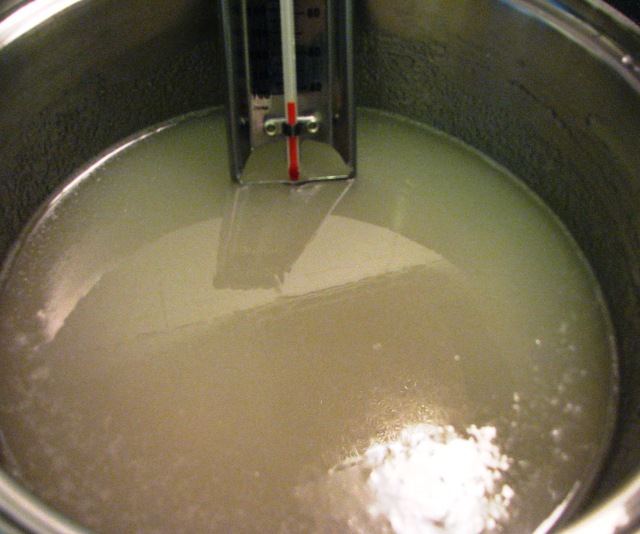 Insert the candy thermometer into the mixture and just let it cook.

In the meantime, separate the eggs and put the egg whites into the mixer. 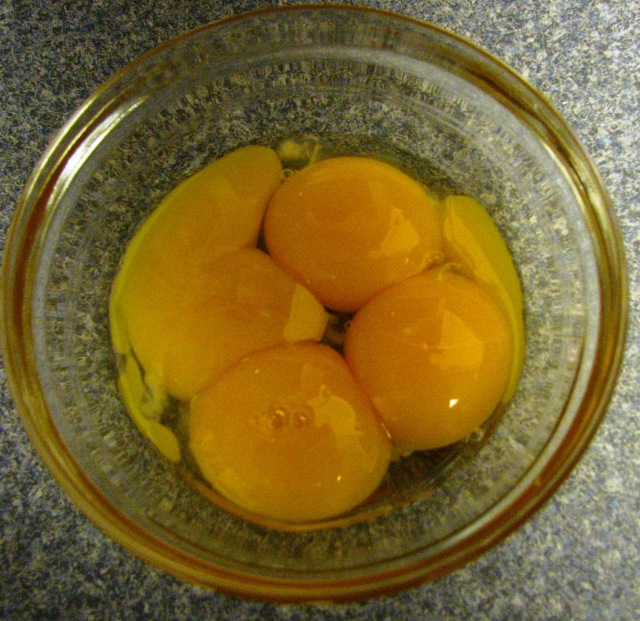 Any idea what to do with these yellow guys?  Just wondered. 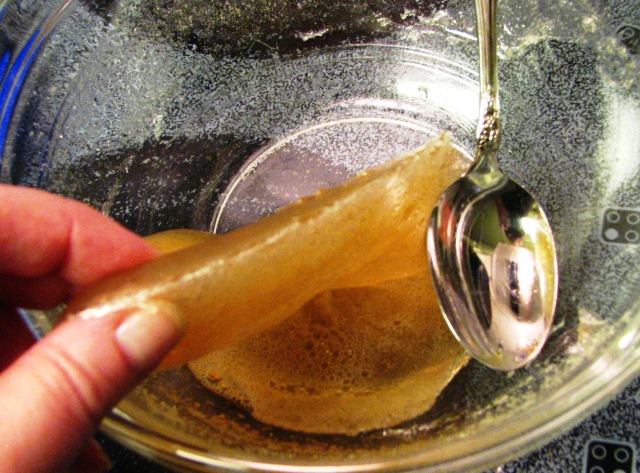 By now the gelatine will look like this.  A big blob.

Be sure to keep an eye on that candy thermometer.  Cook the syrup until it reaches 238° whichi is just below where it says “soft ball” on this one.

As soon as the boiling mixture reaches 238° remove it from the heat and dump in the gelatine blob.

It will immediately foam up .  Just stir until the gelatine gets completely dissolved in the super hot mixture. 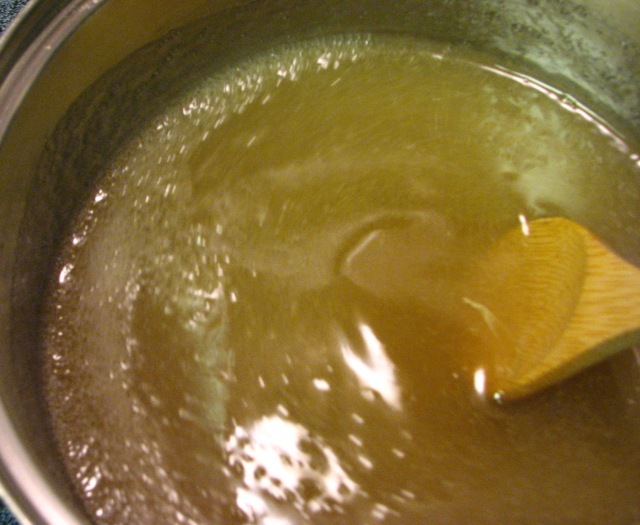 Now comes the fun part.  And the part that was impossible for me to photograph.  I hoped that Dear Hubby would come home just in time to get a pic of the next step.  But alas, he didn’t arrive in time.  So you’ll just have to picture it in your head.

With the mixer beating the egg whites again, slowly…. and I mean very slowly….. pour the hot mixture into the egg whites.  In a little tiny steady stream.  If you’ve ever made divinity, you understand how to do this.  Just keep the mixer going on medium speed while slowly adding the hot syrup.  If you get in too much of a hurry, you will cook the egg whites and have a big mess.  So just take your time and let that little stream pour into the egg whites with the mixer running.  And do not try to take a picture while you are doing this.  You just might end up with a marshmallow-coated camera.

UPDATE:  Look!  Janna (my niece) and Kaye (her mom-in-law) just sent me a pic of their first attempt at marshmallows with the brand new mixer that they all gave Kaye for Christmas this year.  Kaye was nice and said she wouldn’t charge me to use her picture.  She caught it just right….. the tiny stream of hot liquid being poured into the egg whites while the beaters are running.  Good job, Janna & Kaye!  Thanks!  (Sure is nice to have guest photographers on the blog!)

Nice mixer, Kaye!  I almost could have passed it off as mine, couldn’t I?  I might just have to bring my mixer to your house and we’ll do side-by-side recipes.  And loads of blog pics.  We definitely need more recipes that require a nice big mixer now.  I’ll work on that for the New Year for sure.  And it sounds like you’re having a very Merry Christmas.

This is how mine looked as it was beating just after I added the last of the hot syrup. 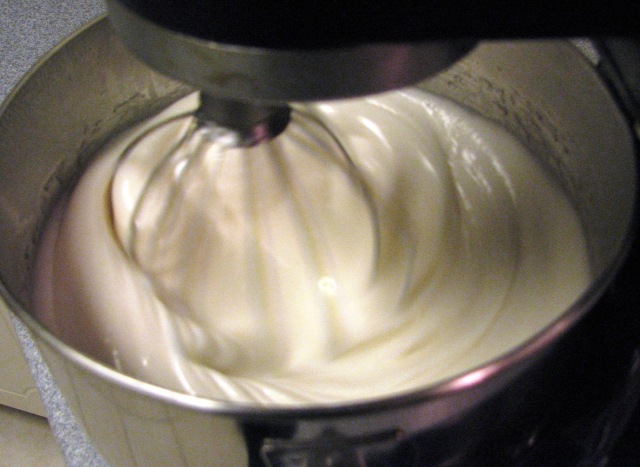 Set the timer just as you finish adding the syrup and beat this mixture for 15 full minutes.

Somewhere in the middle of the 15 minutes, I dumped in a little red food coloring to make these peppermint marshmallows pink.  I tried just swirling a bit of red in the finished product one time and it wasn’t terribly successful.  So I just went with total pink marshmallows this time.

Just as the 15 minutes was up, the mixture had increased in volume and nearly filled the bowl.

While the mixture is beating you need to prepare the pan for the gooey mix.  I used a jelly roll pan, but also used an 8 x 8 square pan because it was almost overflowing in the jelly roll pan I used.  It is imperative that you oil these pans very generously.  Oil spray works best.  But you can also just dump some oil in the pans and spread it around.  Very generously.  You’ll be sorry if you don’t use enough oil!  This stuff is very sticky and will adhere to anything not oiled.  Just sayin’.

Here it is in the pan.  Do not cover it with anything.  Wax paper or anything else will instantly adhere to the marshmallows and you’ll never get it off. 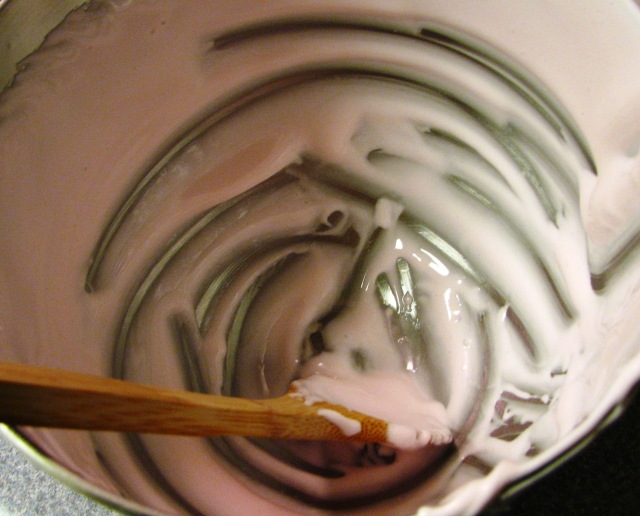 Of course there is always this……… 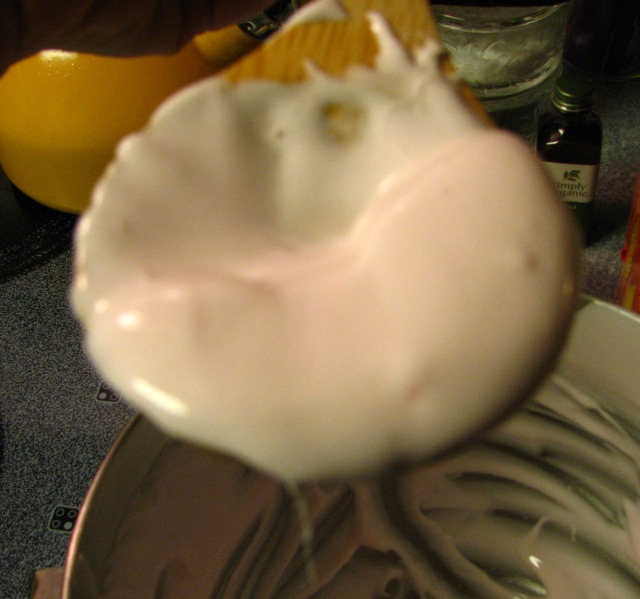 And then there was the yummy beater.

And I scraped every last little bit off with my fingers and ate it up. 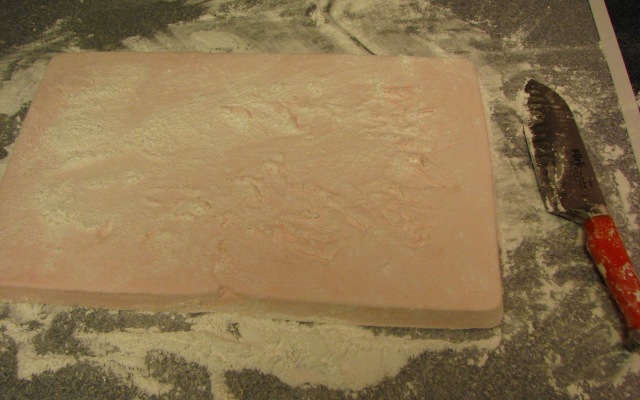 After the marshmallows are set, turn them out onto the counter or a board with loads of powdered sugar.  Just dust powdered sugar all over the entire kitchen.

Cut them up into squares.  Be sure to dust the knife with powdered sugar too.  And your hands.

And you have to dust powdered sugar on all the cut sides too.  Or they would immediately adhere back together again.

I cut some of them into smaller squares and made this little mini pile.  A handful of these in a cup of hot chocolate……..mmmmmm good!

I got this recipe many years ago from a gal who works at EQ.  Here’s the link to that site so you can print out the exact ingredients and make your own.  Remember.  They are yummy.  And one bite will immediately quench those “why make marshmallows” naysayers.

One more pic.  While I was writing this blog last night, I kept running outside to check on the lunar eclipse.  Here’s my feeble attempt at a picture. 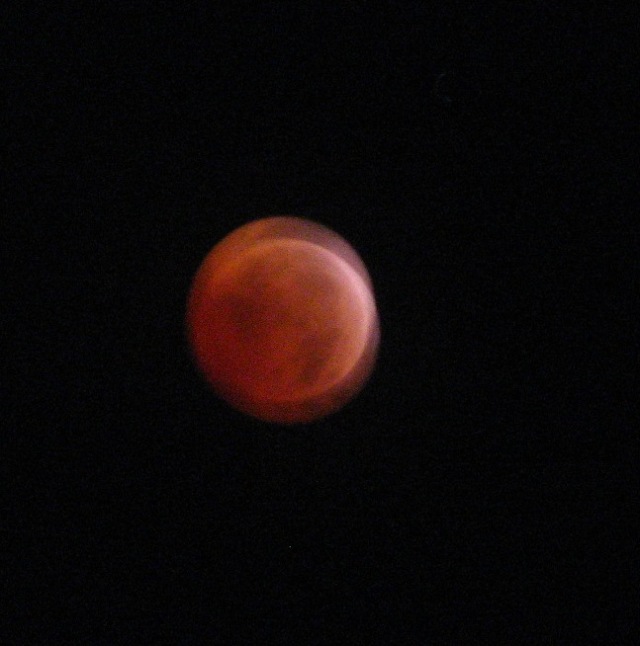 It was really quite awesome!  And I really needed a tri-pod.

This entry was posted in food, recipes and tagged challenges, fabric, food. Bookmark the permalink.