Revealing our Secret Sisters was a much anticipated event.  We had such fun that this may become a permanent retreat activity.  Hardly anyone was discovered putting little gifts around the room.  Some were even smart and put things in the bathrooms too.  To be discovered all day long.  Didn’t I tell you these gals were sneaky?

Isn’t this little guy on LaNelle’s shoulder cute?  They look like they are having a good conversation.  Every retreater in the room wanted one of these too.  The funny part?  After SS were revealed and it was discovered that Sue H had LaNelle, someone asked Sue where she bought this little guy.  Her answer?  “I don’t know where he came from.”

You see, Melinda came to retreat a day late.  And her name didn’t get in the draw.  So she and I secretly decided that she would be a “Roving Sis” or as some said “Step Sister” and she just left gifts in mulitple places.  So Sue truly didn’t know how LaNelle got this guy and was quite stumped as she walked around the room showing him off.  The look on her face was priceless when she was asked where she bought him! 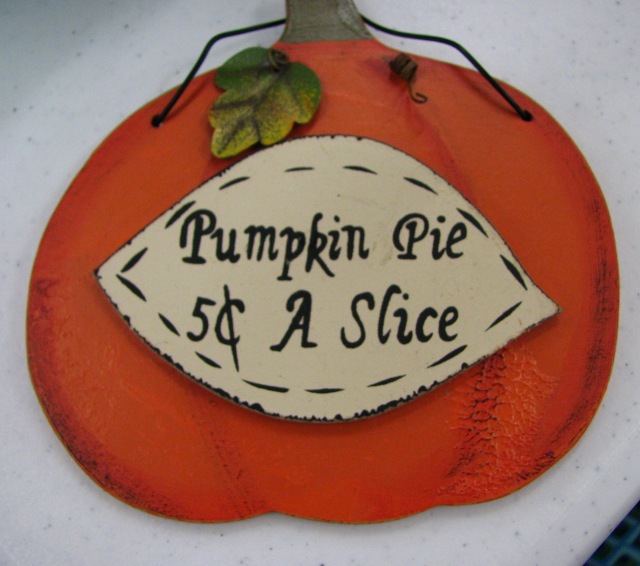 Remember I told you there was a theme for the season.  Here’s another that Sue G got that indeed follows the Fall/Halloween theme.  Very cute!

Thank yous to your Secret Sis evolved into the whole room replying in unison “You’re welcome!”  It started with one, which then brought a chorus of “Who said that?”  Soon everyone was replying when someone got a gift and stood up and said, “Thank you, Secret Sister!”  Didn’t I tell you these gals are clever?

Two gals left retreat early so secrets had to be revealed early for them.

Here are Linda, Jules, Phyl, Sue G & Pat.  Pat and Jules had to go home early to go back to work.  Silly work that gets in the way of quilting!  They were not ready to leave.  So Sue revealed herself as Pat’s SS and Pat revealed that she had Phyl who had Jules who had Linda.  Or was it Jules had Phyl and Linda had Jules while Sue had Pat and Pat had ??  Nevermind.  I’ll never get it right.  But it was a “six degrees of separation” kind of thing.  Or something like that.  So it deserved a picture.

Karen’s SS had a smiley theme going.  All her things had smileys on them.  Including this guy……… 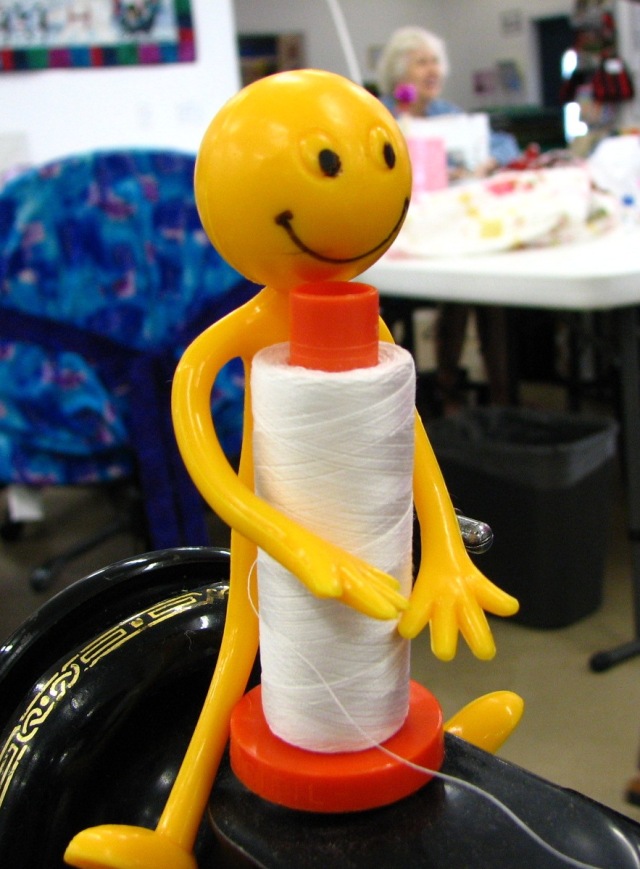 …….. who was one big smiley face on an alien-looking body.  And he hung out on Karen’s thread.

It was Lani!  And she gave Karen all the rest of the smileys once she was revealed.

So another Mr. Smiley turned up riding the llama/giraffe/horse.  There were smileys everywhere! 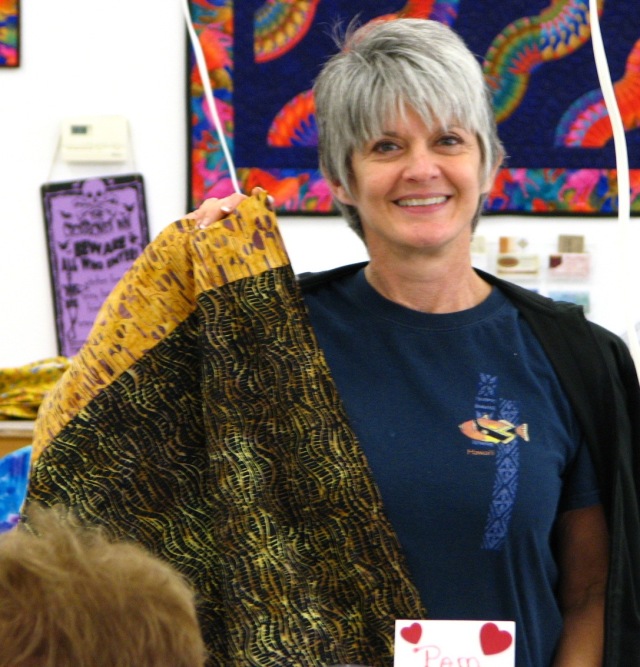 Pam’s SS LaNelle made her a pillowcase to match the pj’s she’d worn.  She made it while we were all in the room.  And gave it to Pam.  And not one of us noticed.  Apparently we were oblivious to anything happening around us.  I blame it on all the quilting I accomplished.  Head to the grindstone and all.  Not. 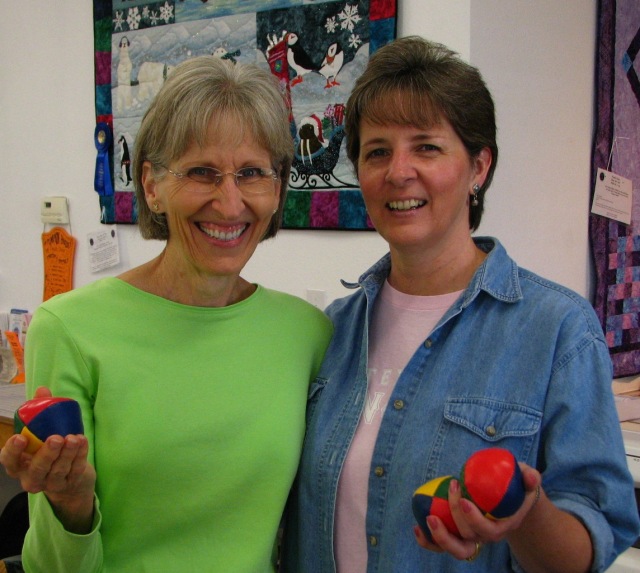 Judy was Suz’ SS and gave her these cool juggling balls.  I’m sure Suz is off taking juggling lessons as I write.  Or watching a baseball game.  One of the two.

My SS turned out to be my friend and fellow Rangers fan, Suz!  Suz is actually the one who got me interested in watching the ballgames and she’s my go-to woman for all my baseball questions.  She had the easiest time of all with getting gifts to me since I was sitting right next to her.  She even slipped them in on me while I just barely had my back turned while I was blogging on the computer!  I guess I was focused.  The final gift she gave me was an authentic post-season souvenir peanut bucket from the Rangers’ game!  Complete with peanuts and candy bars.

Which I enjoyed during the Rangers Ballgame as they defeated the Yankees in Friday night’s game to become the AL Champions!  They are headed to the World Series for the first time ever!  And I will be glued to the TV as the games begin this Wed night.  GO RANGERS!  And if you go to Quilter’s Dream any day next week and say “GO RANGERS!” you can get in on the red fabric sale!  Red fabric on the bolt in stock only – 15% off.  GO RANGERS!  I’m going for the most times I can say GO RANGERS! in a paragraph.  Could you tell? 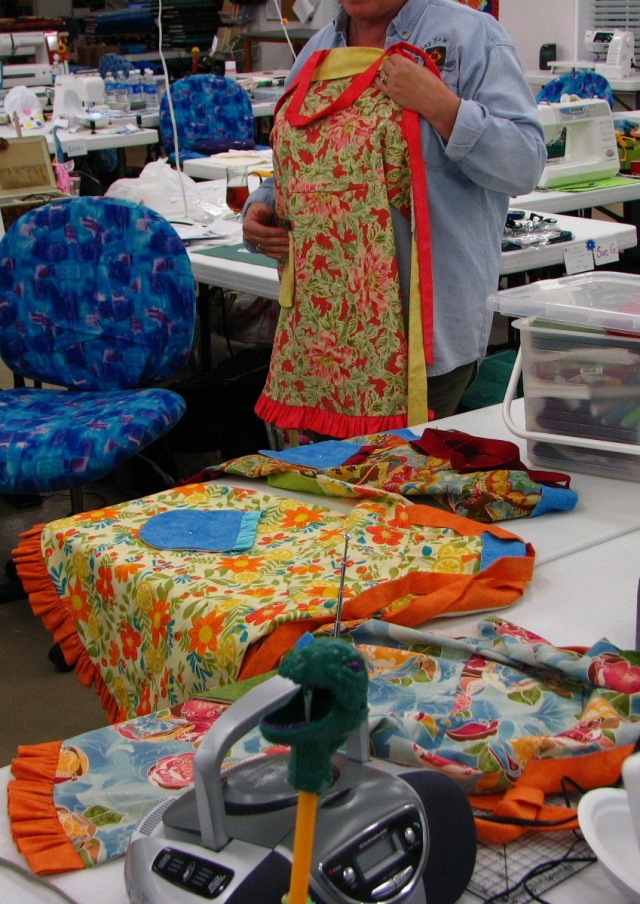 This picture has absolutely nothing to do with Secret Sisters.  In fact, it is Sue showing her aprons in our Show ‘n Tell time.  So I guess you could say that it’s a teaser for the Show ‘n Tell pics to come on the blog.  But I really included it to show you this:

I mean really.  What in the world is this guy doing at a quilting retreat?

And one last thing…… 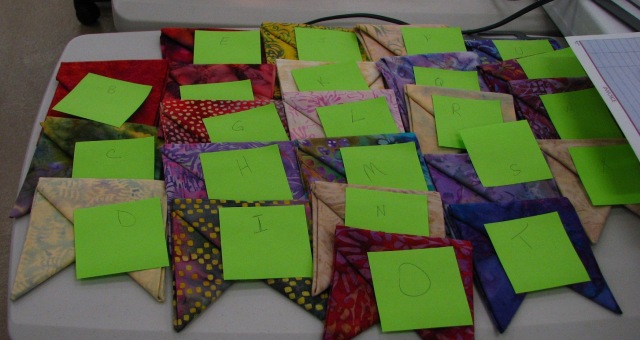 If I ever purchase a pattern that requires me to do this to organize my fabric?  Just shoot me dead.  Really.

This entry was posted in retreat stuff and tagged fabric, friends, retreat. Bookmark the permalink.

7 Responses to Secrets Revealed at Retreat