Fall has finally come to Texas.  And with it a bit cooler temps.  At least for Texas.  I think it was only 60 degrees the day I made this soup.

Soup is my favorite thing to make on a chilly day.  Well, almost favorite.  It’s pretty much a tradition that I make chili when the first cold north wind blows through our yard.  But I got in a hurry this year and made chili a few weeks ago.  When it was just barely cooling off and the temp was about 81.  Because sometimes 81 feels cool in Texas.  Just wait until you northerners hear what the temp is in January.  You are going to be sooooo jealous!

But I was talking about soup.  I got this recipe from The Pioneer Woman.  Where I get most of my favorite recipes.  This one has butter and heavy cream.  If you’ve been paying attention on this blog, you are not at all surprised.  But I also added an ingredient to PW’s recipe.  Beware Sally!  I added red peppers.  And there are pics to follow.  Sally just decided to not read the rest of the blog today.  She’s my friend who hates peppers of any kind.  But if you’ve been reading this blog, you already know that.  We’ve talked about Sally’s hatred of peppers before.  Just go to Pioneer Woman’s site, Sally, and print the recipe.  She didn’t use peppers in hers. 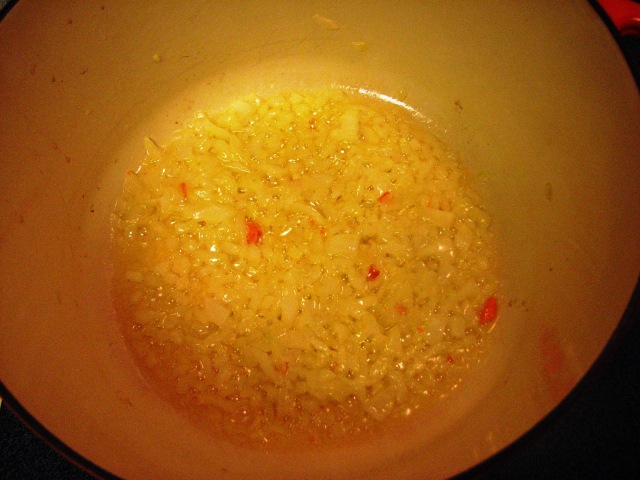 You start with butter and onions in a heavy pot.  And it already smells wonderful in the kitchen.

Chop up some carrots, celery (not pictured because Dear Hubby had run to the store to get some while I was busily chopping this stuff), red peppers (if you’re like me and want to be different and add a bit more color to the soup) and cauliflower. 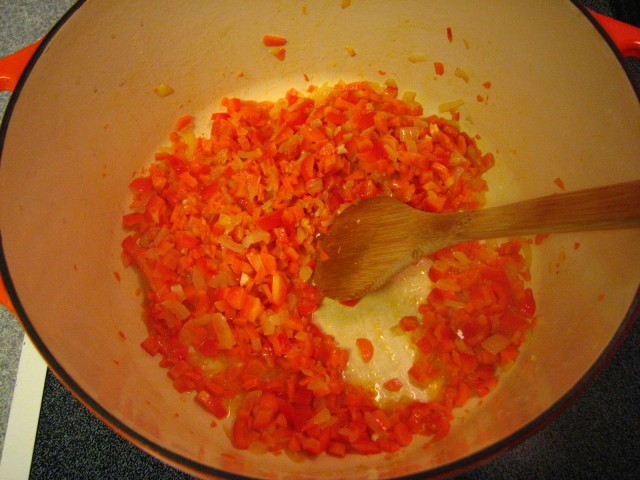 Throw everything but the cauliflower in the pot with the onions and cook for a few minutes. 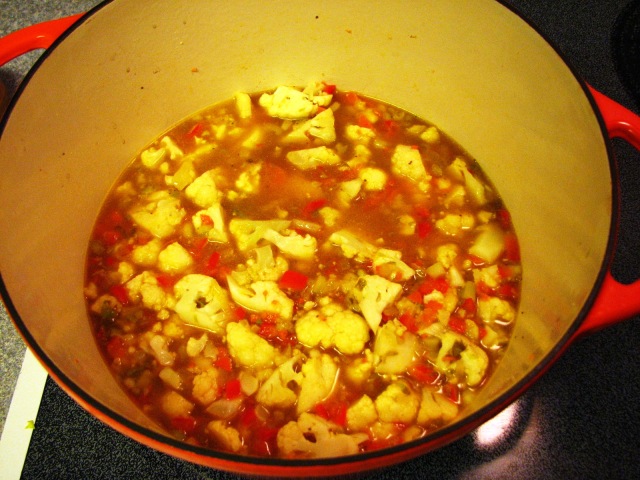 Then add the cauliflower and some fresh parsley or even dried parsley flakes, cover and cook for about 15 minutes.  Then add 32 oz of chicken stock and bring to a boil.  Reduce heat and simmer.

In another pan, melt some butter.  Then stir in about 6 tablespoons of flour.

Whisk in 2 cups of milk and bring it to a boil.  Remove from heat and whisk in 1 cup of heavy cream.  You heard me.  Cream.  Yummy goodness.  I think PW used half & half, but I went for the heavy stuff.  The whole shebang.  Just because.

Add the butter/flour/milk/cream mixture to the simmering soup.  Add a little salt and pepper too.  Cook for about 15-20 minutes more.  Adjust the seasonings, if necessary.

Before adding the soup to your bowl, throw in a dollop of sour cream.  You know.  A dollop.  Or a couple of tablespoons.  More yummy goodness.

Serve with crackers or crusty bread.  Very yummy.  Perhaps even if you don’t like cauliflower!  It’s the cream and the butter.  Anything with those ingredients just has to be good.

Now go to the link to Pioneer Woman above and print out the recipe!  And feel free to be extra daring and throw in some red peppers.  Unless you’re Sally.  Then you have my permission to leave them out.