This One’s for Suz

And for Kaye too, while we’re at it.  Suz because she’s my good friend and she finally subscribed to the blog.  And Kaye because she accidentally unsubscribed and we spent the whole day trying to figure out how to get her back.  We were both exhausted when it was all over.  If you can get exhausted by just emailing.  So this one is a test for their email subscriptions.  Why?  Because I like them!  M-O-U-S-EEEEEEEE.

For those of you not old enough to remember The Mickey Mouse Club, I apologize for those last lines.  I just couldn’t help myself.

I decided to get a jump on Retreat Food last night.  Melissa at The Compass Centre feeds us so much that we all gain 10 pounds in 4 days and think we will never want to eat again.  But for some strange reason we all bring snacks of our own to put on a snack table for all to share during our retreat.  As if we will starve or something if we don’t have lots of extra snacks.  If you saw the food they feed us there, you’d know how really crazy it is to have a snack table.  Nevertheless, a snack table we must have!

So last night I made these for retreat:

Funky Frito Fruckies.  The name and the recipe came from my friend, Judy.  Thanks, Judy!  They are great!  Not sure about the name though.  I still haven’t figured out what it means.  But I thought I’d share them and the recipe with you today.  For those of you not going on retreat.  So you can make some and eat along.  It’s one of those great sweet & salty together kind of snacks.  And chocolate.  Yum.   Like chocolate covered pretzels. 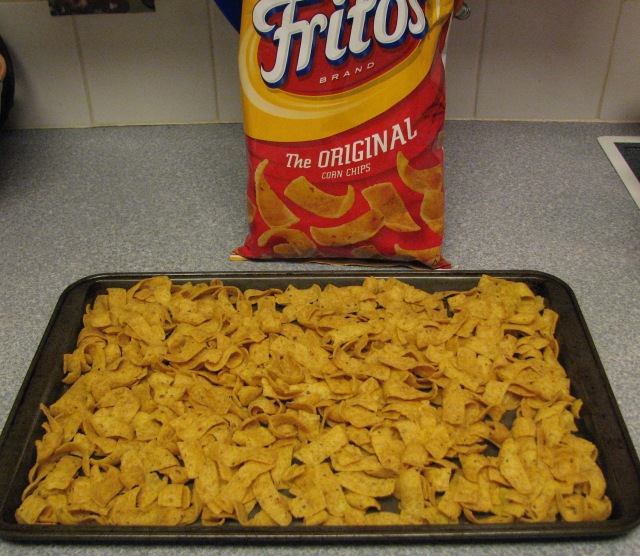 Put the Fritos in a greased jelly roll pan.  The recipe calls for a 10½ oz bag, but my bag was 14½ oz.  Do they even make 10½ oz bags?  What’s up with the measurements in recipes lately?  I had the same problems with the Pumpkin Pie Dump Cake a few days ago.  I think it’s a conspiracy in the food industry to confuse us all.  And I can be easily confused.  So I just dumped them out until the pan was mostly covered.  It’s a precise measurement.  Not.

Put the sugar and corn syrup in a saucepan and bring it to a boil.

So I used some chocolate chips too.  They worked just fine.  It’s a very forgiving recipe.  Isn’t that the best kind?

After the sugar/corn syrup comes to a boil, dump in the peanut butter and remove it from the heat…..

…. and stir it until it becomes smooth and creamy.

Then pour it evenly all over the Fritos.  Or as evenly as humanly possible.  Which for me wasn’t very even.  You’ll probably do much better. 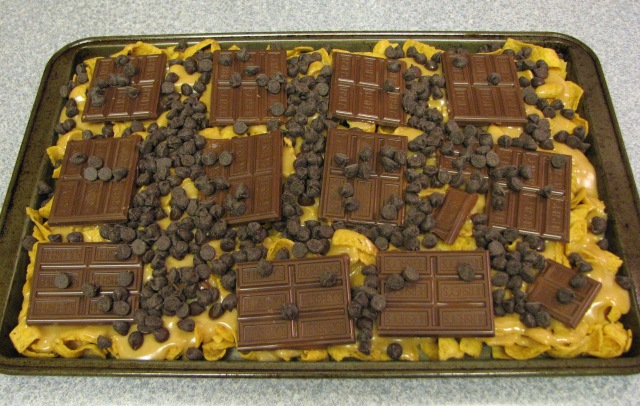 Then lay the chocolate bars all over the top.  I suppose if you actually have 11 bars, you’ll be able to cover the whole top.  I just filled in with chocolate chips.  Chocolate is chocolate after all, right?

The heat of the syrup will soon melt the chocolate and you can spread it around.  Then you have to wait and let the whole thing cool.  I was impatient and put it immediately into the fridge.

After it cools it will look like this.  The recipe then says to “break it into little pieces” which didn’t work so well for me.  I sort of tore it into pieces.  Somewhere along the way I decided to get out my handy, dandy Sudoku, Sashiko, Santoku knife and cut it into little squares.

Here’s what it looked like when I “broke” it into pieces: 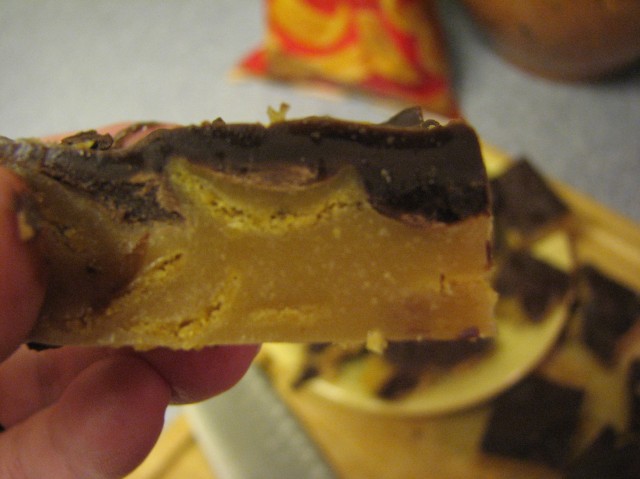 And here’s the “cut with the handy, dandy knife” squares.

And exactly 4 seconds later this is all that was left.  *burp*

Now go make some right now so you can eat along while we’re at retreat!  Here’s a link to an easily printable recipe:

By the way, I also went shopping yesterday and gathered together things for my Secret Sister at retreat.  Wanna see? 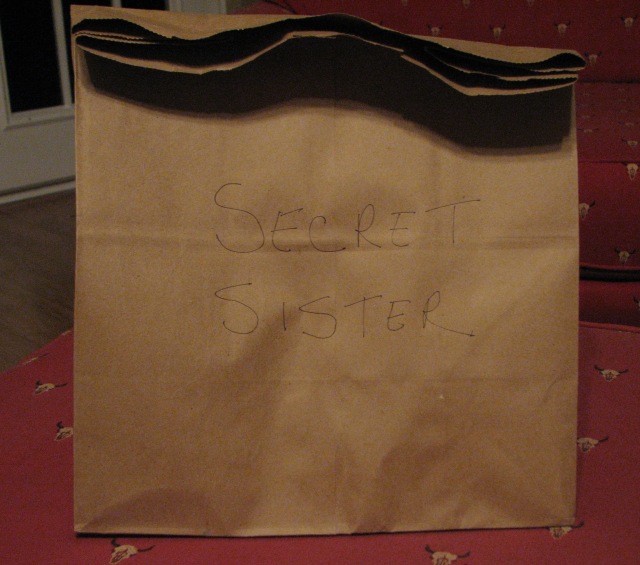 You didn’t think I’d actually show you, now did you?  After all, it’s a secret.  But all the little goodies are in the bag.  So you are seeing them.  Sort of.

7 Responses to This One’s for Suz