I had planned to play a little game.  A “where am I” kind of game.  With a poll.  I’ve never done a poll on my blog before and thought I’d figure out how that works.  But you who know me well have already given away where I am in your recent comments.

Where Am I?
1.  Paris, France
2.  Montreal, Quebec, Canada
3.  Home – playing with pics on the internet and trying to fool my readers

It might have been interesting to see the results.  But since you’ve already figured it out and given the answer away, I’ll just move on.  Feel free to say how you would have answered in the comments today.  We’ll just pretend that there is a poll.

For those of you who don’t know, Dear Hubby recently landed a job.  Just outside Montreal.  Far, far from home.  I am so proud of him.  He is an aerospace engineer who has been driving a school bus for nearly 2 years just trying to make ends meet.  Jobs in his industry are scarce these days.  So when this one came up, he decided he really could not turn it down.  It was getting hard to get the ends even close together, let alone have them meet.

It’s a temporary job, but fairly long-term temporary.  So he loaded up his car and drove 3 days to get to Montreal while I stayed home to hold down the fort and take care of Boo and Miss Kitty.  And Mom & Dad.  This meant that he had to get settled and find a furnished apartment all by himself.

Once again, I am so proud of him!  He found the best, best place.  It is small and cozy.  Very comfortable.  Nice neighbourhood.  Clean and new.  And the price is really, really good.  It’s actually….. perfect.  Dear Hubby would say it was not him.  That God is watching out and taking good care of us on this journey.  Way to go, God.

And now I am here in Montreal.  Actually, Saint-Jérôme for those of you who care about details and want to look at a map.  Mark’s work is just 10 kilometers from his apartment.  And all the pics of his apartment today are especially here on the blog for his mother.  The rest of you get to come along for the ride.  And live our adventure along with us. 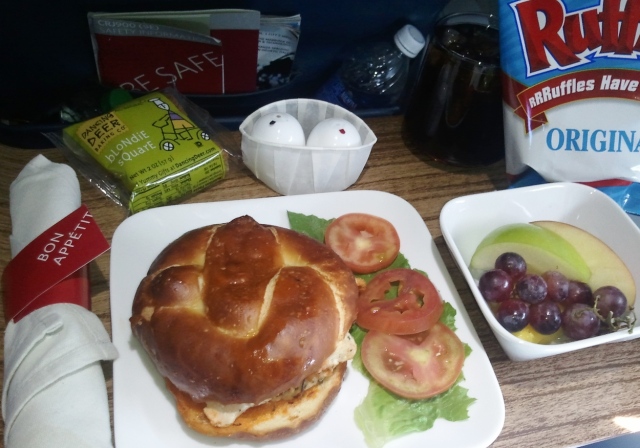 OK, this is a weird pic to start with, but I have to share this part of the journey here.  This is my meal on the airplane on the way here.  In first class.  I got upgraded.  So cool.  And totally unexpected.  Thank you, Madelyn!  The little things in the cup that look like eggs?  Salt and pepper.  Silverware.  China.  Real glass for the Coke I had.  I felt like a queen.  I had to share. 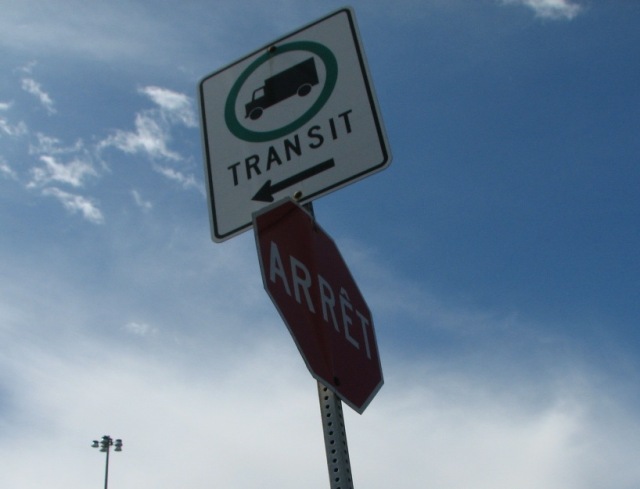 This is a stop sign in Montreal.  It is a good thing it is an octagon.  And red.  Or I would not know to stop.  Did I mention that Canada is a foreign country?  Well, at least here in the province of Quebec, it feels very foreign to a Texas girl.  And hopefully I won’t offend any of you Canadian readers if I say that they love their French here in Quebec!  This Texas gal feels like a fish out of water.

Some signs are recognizable no matter the language, eh?  And now I know the French word for “open.”  Pronouncing it might be a different matter.

And there are a few signs that make me feel right at home too: 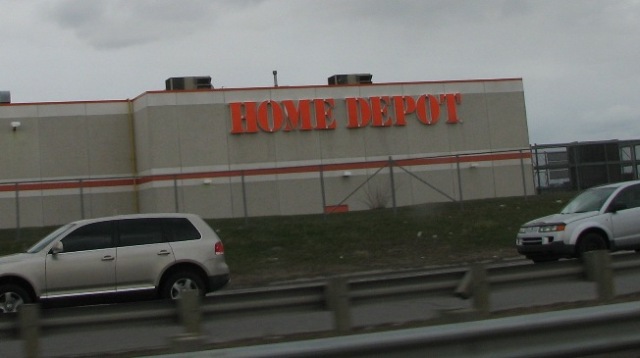 And most especially, this one.  I guess some retailers don’t allow their names to be translated into the language of choice when they open there?  Whatever the reason, I am happy to have some things to make me feel at home.

This sign is just up the hill from the apartment.  We had dessert for my birthday at “Eastside Marios,” a cute little Italian place.  And Tim Hortons is a Canadian staple.  In fact, I might just climb the hill and go there as soon as I finish this blog.  How about a donut for an afternoon snack?

This is what I expected Dear Hubby’s apartment building to be like.  We had searched and searched for a place together online.  And this was the kind of thing we were finding.  Had he been here, it would have been a very long commute to work each day.  And way more expensive.

This is the road leading to Hubby’s apartment.  This drive actually dead ends in his parking lot.  He has a reserved spot!  His building is behind the one at the end on the left.  Kind of hiding behind the bare trees.  Did I mention that it is not yet Spring in Montreal?  My friends in Texas will love that.  Considering it’s probably 85° there today. 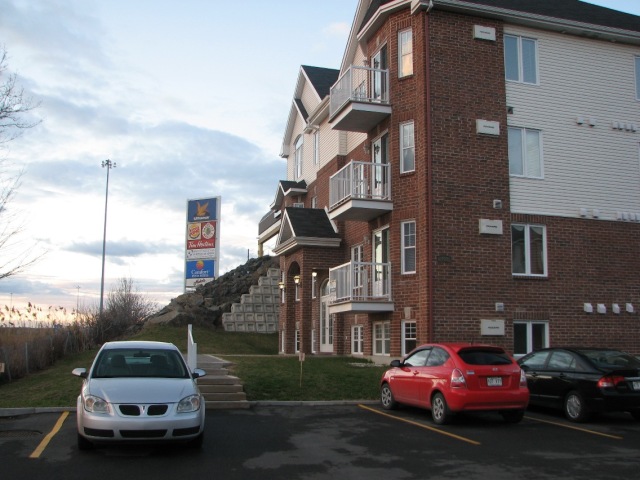 The front of Dear Hubby’s building.  See the sign up the hill I told you about earlier? 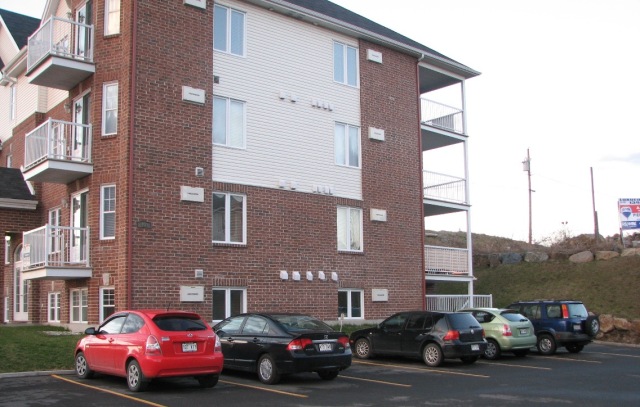 Hubby’s apartment is on the back side of the building.  That’s his balcony – second from the top on the right.  The window just to the left is into the kitchen.  The sun comes up on the balcony side.  Nice.

The entryway inside the apartment.   That’s my big, warm parka hanging on a hook by the keys.  It’s still in the 30’s at night here!  The phone is the doorbell.  The building itself requires a key to enter.  There is an intercom system for visitors.  You punch the button to let them in when they call.  Dear Hubby leaves me the keys in case I want to get out each day so he has to use the intercom to get in after work.  Sometimes I let him in on the first call.  And sometimes we play the “who i-i-i-is it?” game.  Sometimes he even laughs.  Mostly he says, “let me in!”

The view from the balcony.  Looking this way from inside the apartment makes it feel like we’re on the first floor because of the big hill behind.  But we are actually 2 1/2 flights up.  The first floor apartment is one flight down.  Hubby says they have a kitty downstairs who looks just like Boo.  I might have to go visit them one day.

The view the other direction from the balcony.  That’s the freeway off in the distance to the right (service road nearer.)  But when you close the windows, you can’t hear traffic noise at all.  I think the buildings are more insulated for the cold winters and that blocks the outside noise too.

And now for some fun things inside the apartment…… 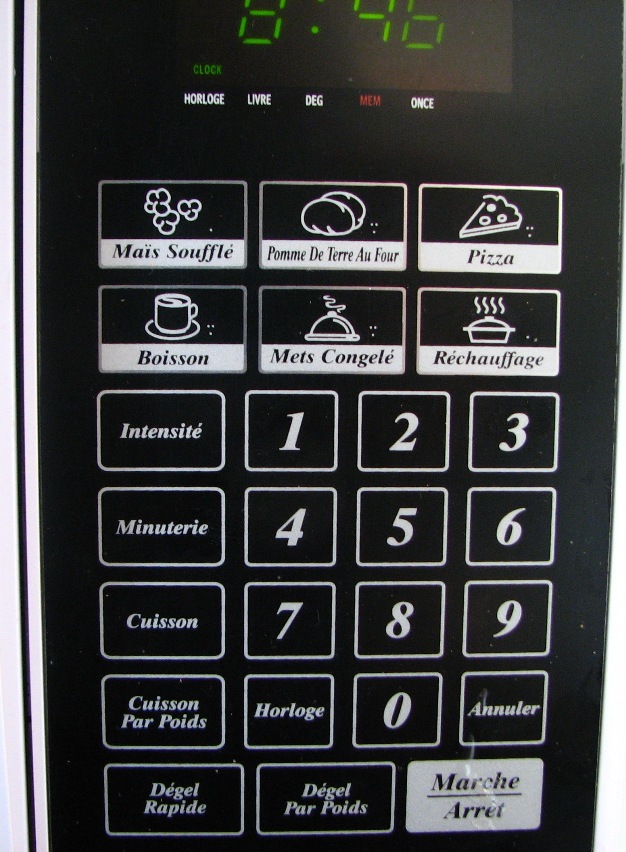 These are the buttons on the microwave.  Really?  I don’t even know how to start the crazy thing.  Dear Hubby uses a translator on the internet all the time.  I know that Arret is stop from the stop signs.  But what’s Marche?  Go?  Start?  March?  And Mais Souffle for popcorn?  Really?  I guess mais is corn?  It’s a good thing there are pictures.  But I assume “Boisson” is soup and not coffee?  Only one good word on the whole thing.  Pizza.  Guess it’s the same in any language.

This is the thermostat.  And it’s warm in here while set on 20.5°!  I know, I know.  It’s centigrade.  And I don’t want to do the conversion every time I look at a thermometer, thank you very much.  There’s a thermostat in every room.  Apparently each heater has its own.

Thankfully the stove/oven has English too!  I’d have a hard time cooking otherwise.

Here’s my receipt from the Dollar Store yesterday.  Seriously folks.  I have no idea what I bought.  And how about those taxes?  That’s more than 10%!

This came in the mail the other day.  Wanna go to A&W for lunch with a coupon?  At least some of the big print is in English and there are pictures.  Does that mean that Mama Burger doesn’t translate to French? 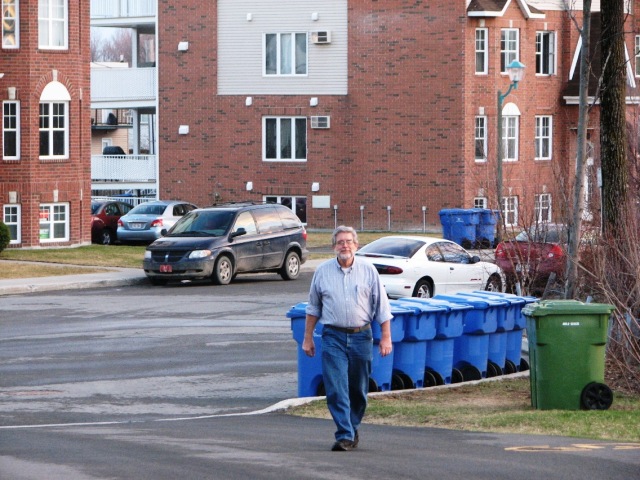 The bedroom.  And yes, I made room in my luggage to bring up that quilt hanging on the wall.  Because I was tired of the blank white wall behind hubby’s head when we talked on Skype with him sitting on the bed.  Now I can enjoy my handiwork behind him.  Nice. 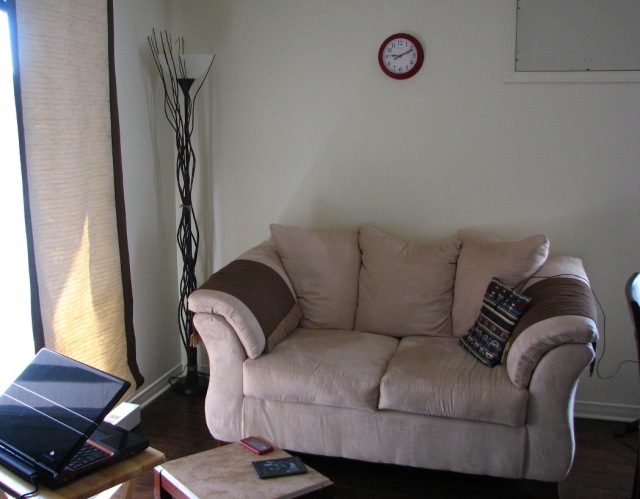 The living room.  Sliding glass doors to the patio on the left.  Functional little red clock on the wall.  My Kindle and smartphone on the little table.  Hubby’s laptop.  No TV.  You heard me…. no TV.

Kitchen.  Technically, other half of the living room.  It’s sort of all one room.  I call it the Great Room.  Just like the fancy-schmancy ones in the big houses in Dallas.  I left it in working order for the pic.  Stuff on the counters from breakfast.  My laptop powering up.  Magazine for a mousepad.  Toaster, microwave, refrigerator magnet from Vermont.  Nice and lived in, dontcha think?  I rearranged the furniture when I arrived.  Which means I reoriented the direction of the table.  Not much else to rearrange.   I might go crazy and rearrange the bedroom next.  Which means I will push the bed 2 inches to the right.  I’m a rebel.

But I’ve had the most fun today with this: 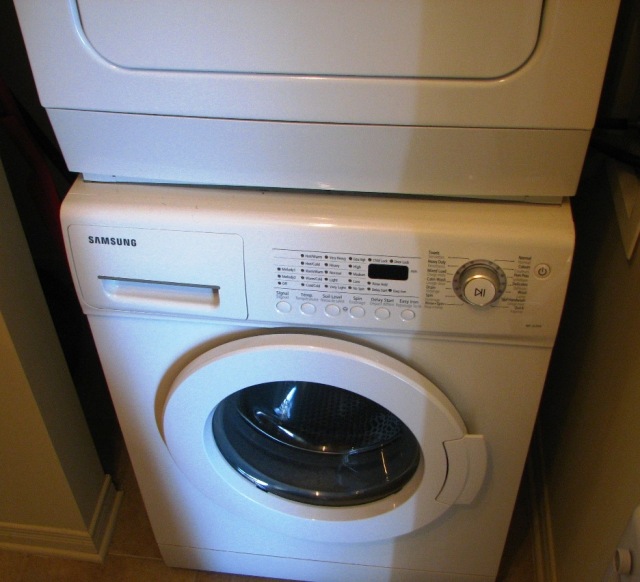 Yes, it’s the laundry.  I’ve never had a washer that loads in the front.  And this one is just plain cute.  Never mind that it’s so small that you have to wash one sock at a time. 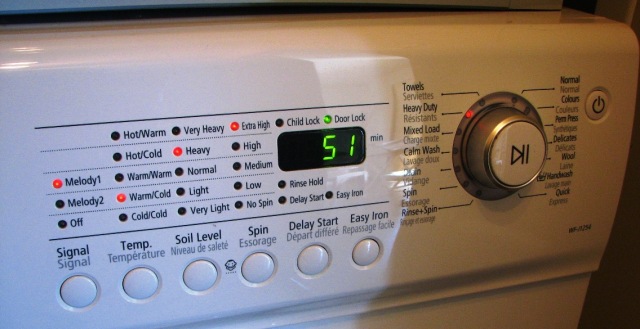 Lots of buttons on the front.  Thankfully they are in English.  Otherwise I might have to hire someone to do the wash. 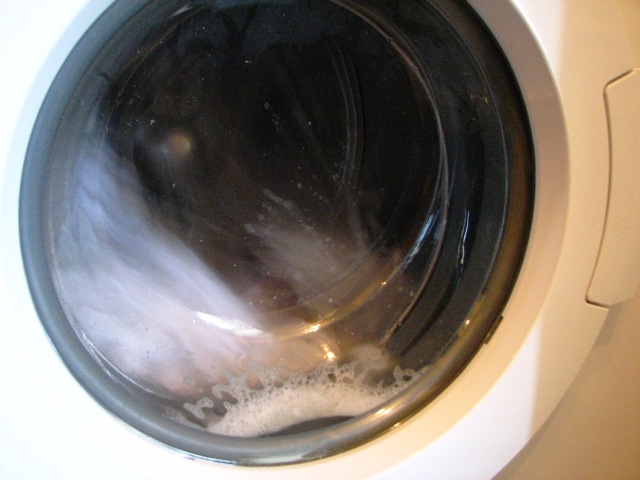 I actually sat on the floor in front of the washer for several minutes when the wash started up.  And just watched.  It spins one direction as the water fills…..

Then it stops for a minute and rests…..

Then it spins the other direction…..

It’s amazing what a person will do for entertainment when they don’t have a TV.  I bet you can hardly wait to see what tomorrow brings, eh? 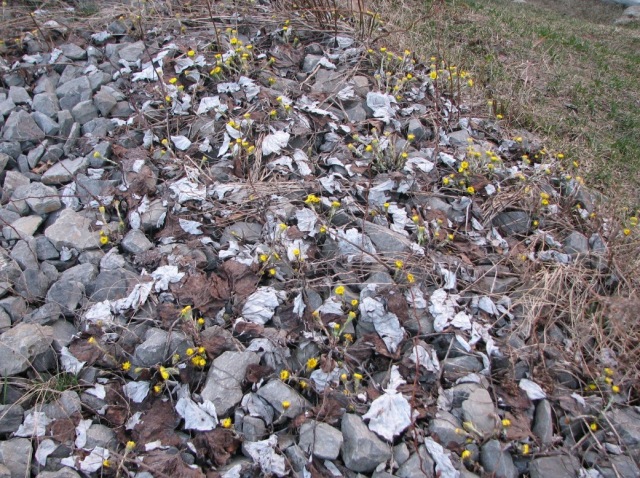 Spring is coming to Montreal as evidenced by these little flowery weeds trying to grow.  They are even more determined than the weeds in my yard back in Texas.  Coming right out of this rock!

It’s been warm and sunny the last two days (since I took that earlier pic) and look at them now!  I have a feeling I only missed Spring by about 2 weeks.  Phooey!  Maybe I’ll have better luck with hitting Fall at the right time.

Look who else I found outside today.  Wonder if he’s tame enough for some cat therapy for me?  I might have to run down and find out.

Montreal.  Last Monday as we drove back in from Vermont.  See me in the car mirror?  Named for Mount Royal – the triple peaked hill in the heart of the city.  According to Wikipedia.  It’s the second largest city in Canada and the 15th largest in North America.  It’s also the second largest French-speaking city in the world.  I didn’t need Wikipedia to know that.  The city proper covers the Island of Montreal.  Did you know that Montreal was an island?  Surrounded by two separate rivers.  The things you can learn when you visit a place.

Tomorrow Dear Hubby is going to help me find a quilt store.  And do some more sightseeing.  I’ll be sure to take my camera along!  And share it all with you.

Who knows what I’ll come up with for entertainment next?  By the way, the washing machine sounds like an airplane taking off.  I better go check and make sure it’s OK.

19 Responses to Where Am I?