OK, not really.  Vegan, I mean.  But it is a catchy title, don’t you think?  And I did my part.  I’m all about healthy eating this year.  So I turned my dishes into vegan ones.  Leaving out eggs and milk and substituting soy milk – even in the pumpkin pie.  And I fooled them all.  It was delish!

But there was turkey – not tofurkey – on our table.  And even (horrors!) ham.  And I had some of everything.  Every once in awhile even a (mostly) vegan falls off the wagon.  At least that’s my story.

Jas was there.  Hanging around waiting for something to fall on the floor.

And Penny.  Isn’t she pretty? 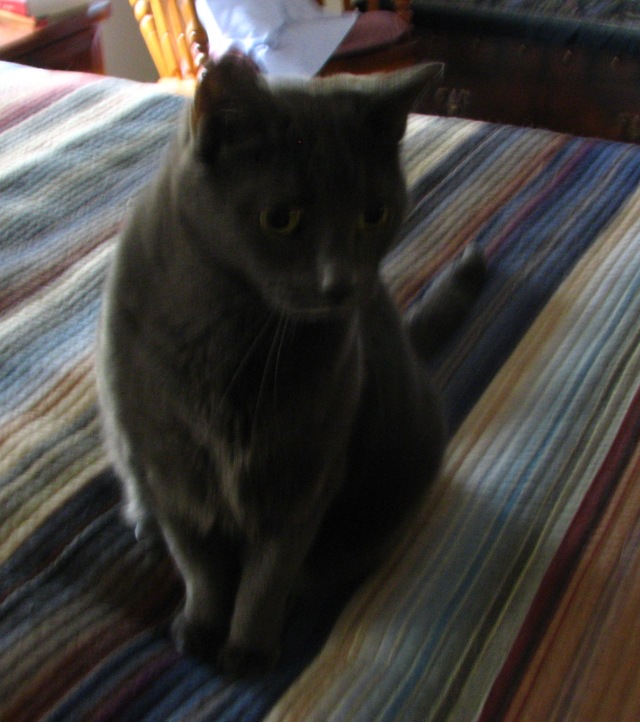 Taylor too.  Penny & Taylor were imprisoned for the day in the master bedroom.  I don’t think they minded.  Because big, bad Jasmine was in the rest of the house.  See large dog pic above.

This was breakfast.  Biscuits with chocolate sauce and strawberries.  A family tradition.  And I had to have some leftovers when we arrived at noon.

Excuse me.  After looking at that picture, I need chocolate.  I think I have to run to the store……. 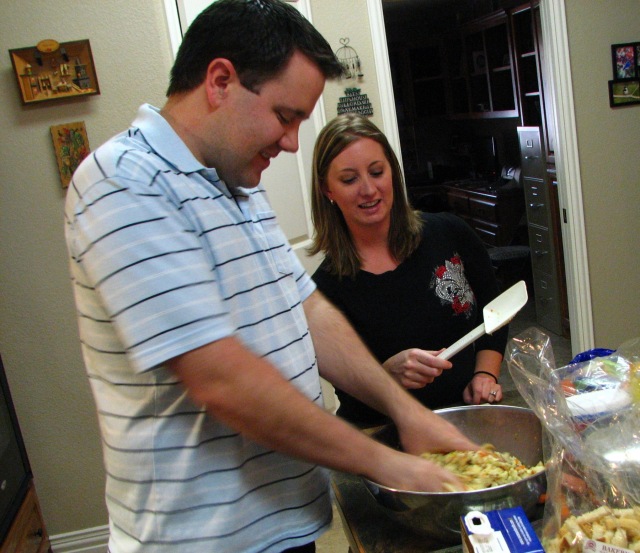 Paul believes in getting his hands into his work as he made the fabulous dressing.  Janna helped by watching.  And spooning the finished product into the pan to bake.  And eating.  We all helped by eating.

Paul learned from his Dad about helping in the kitchen.  Allen really takes his carving job seriously. 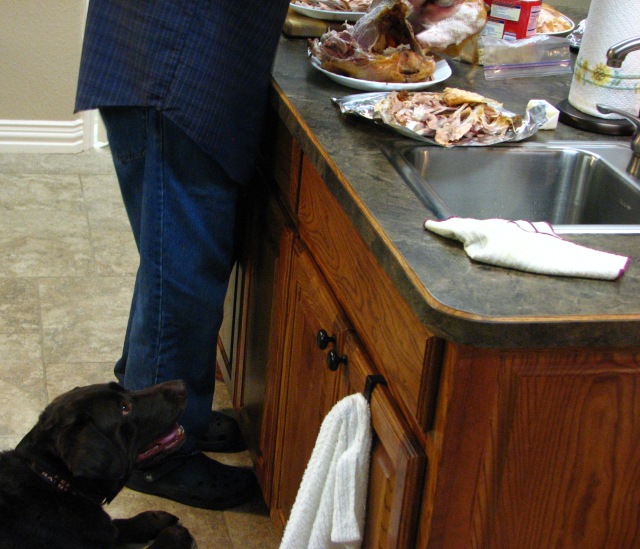 And he has a little shadow below.  Just like last year.  She’s just sure that something is going to fall overboard.

The 20-somethings do what 20-somethings always do….. play on their techno-toys.  Courtney, Nate and Paul did their fair share of computing while waiting for dinner.

While the kitchen smells were making my stomach growl, I took the opportunity to stroll around and take a few pics of fun things in the fabulous lakeside home. 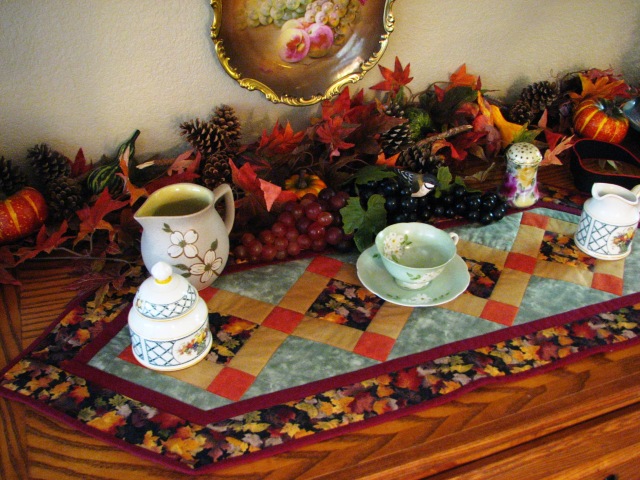 And how about this saying for the dining room wall?

Kaye takes pics of birds at the backyard feeders all the time.  They have quite a variety of birds to watch!

I especially like this pretty bluebird.  And yes, this is my usual pic of a pic.  I did not see one of these birds while we were there.  So disappointed!  Cropping pics so they look like my own is a favorite trick on this blog. 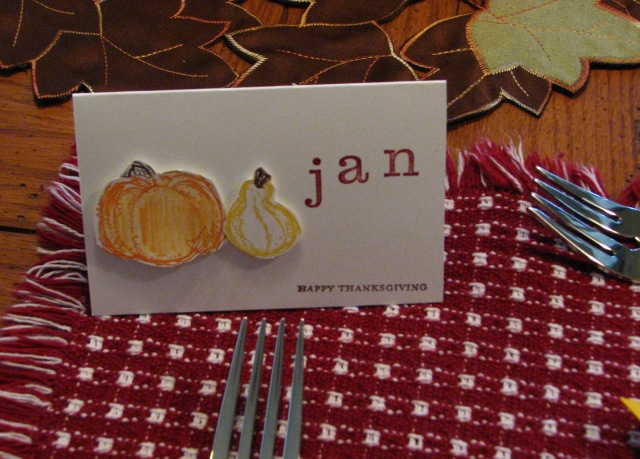 And how about these cute salt & pepper shakers?  Purchased in the Florida Keys.  Where they had a hard time finding anything that didn’t have seashells on it.  The little peppers are just right for a Texas home. 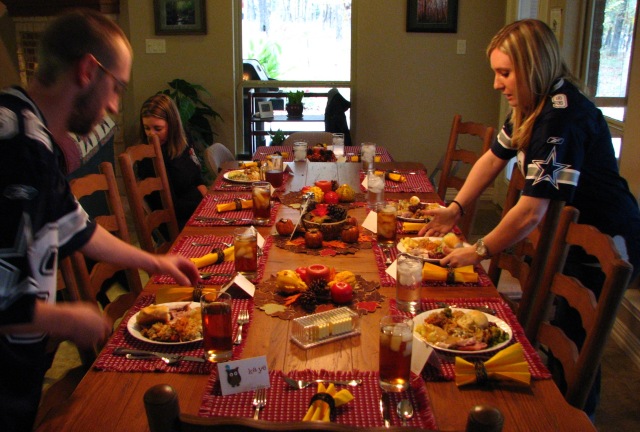 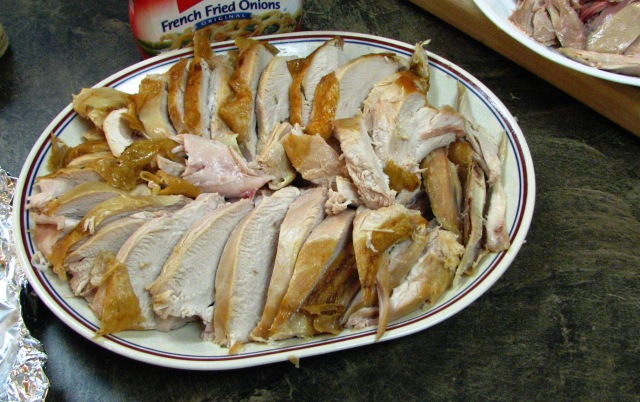 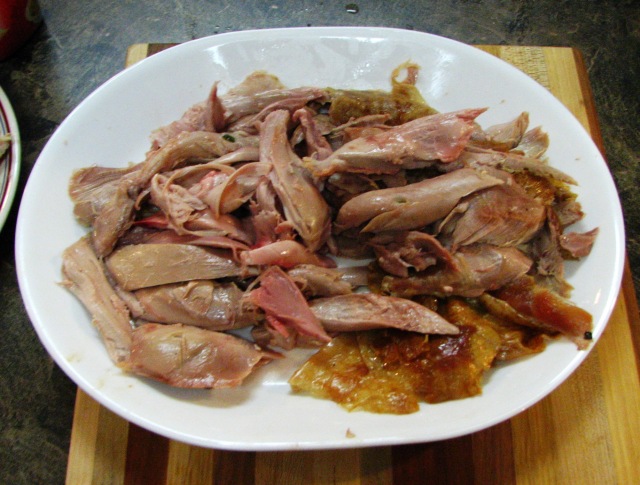 Everyone filled their plates.  Mom & Dad on the right, Sis just behind them in pink, then Allen & Dear Hubby on the left.  Loads of yummy food.  I missed pics of corn casserole (also made by me and vegan), green bean casserole, cranberry sauce, mashed potatoes and gravy, rolls and stuffing/dressing.  There were also pumpkin, pecan and cherry pies!  But we ate them so fast I didn’t even get a pic.  Picture them delicious. 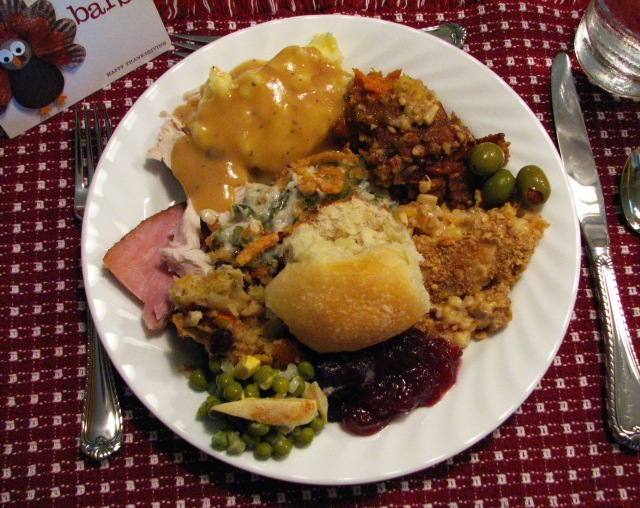 But here’s my plate.  With a little bit of almost everything.

Now I definitely need a snack.  How about you?  Is it time for Christmas dinner yet?

7 Responses to A Vegan Thanksgiving