Down on the Farm

My Dear Sis married a farmer.  And then her Dear Daughter did the same.  And on our journey south from Canada to Texas, we spent a few days on the farm.  Doing farm things.  Like eating things made with butter and bacon.  Just like Pioneer Woman.  Dear Hubby wanted to stay there.  Like forever.  He even asked me if I thought maybe he could just hang out with Dear Niece’s Hubby to help him with the harvest.  But he can’t fool me.  I know he was only thinking about the food.  And the fact that soon he will have to go back to healthy meals again.

But I was talking about farm things, wasn’t I? 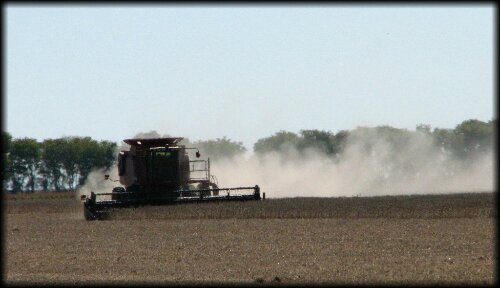 We met Dear Niece’s Hubby, Mike, out in the field one day to learn all about combining.  He had started to combine the soy beans and asked if we might like a ride along.  Look at the nice cloud of dust that is kicked up!  A big part of that is all the extra stuff from the field that is just spit out at the back of the combine.  As it strips everything away so that only the beans are funneled into the bin.  And I learned that you don’t want to be anywhere near that cloud of dust if you know what’s good for you.  And your lungs.  And clothing.  And you don’t want to be all itchy for the rest of the day.

There’s Farmer Mike sitting in the cab of the combine.

And Dear Hubby looks on as the beans are offloaded to the wagons.

It’s one big machine.  I climbed aboard and off we went in the field.

Here we are looking down the long rows of soy beans.  I asked Farmer Mike why it was crooked on the side and he answered matter-of-factly, Because I can’t drive straight.  I’m sure he just loves that I asked that question.  And then shared it with all the world.  He answered lots more questions.  About buying seed and how dry the beans and corn have to be and fertilizer and all the things that go into farming the land.  It was a very educational ride.  I asked him if he got bored out there all day and he quickly said no.  He has a nice radio in his combine.  And I imagine that he just likes being in charge of his own day and being out in his fields, reaping the fruits of his labors.  I’d be listening to audio books if I were out there.  Wonder if I could steer with my knees and stitch while going down the rows?  I have a feeling my edges would be way less straight than Mike’s were!

The blade on the front scoops up all the beans and then some magic occurs somewhere in this big machine and it strips those beans right out of their pods.  Don’t ask me how it works.  It’s magic, I tell ya.  Magic.

Then it funnels all the shelled beans right into the bin behind the cab on the combine.  See Farmer Mike’s reflection in the glass?

And as you go down the rows, the bin fills up.  So that after two swipes you have to stop and offload them onto the wagons.  Mike says it fills up even faster when you’re doing corn.  And you have to have extra wagons stationed in the field for offloading.

This is Farmer Mike’s Dad’s place.  They do the farming together most of the time.  But his Dad’s health has been an issue this year so Mike is doing most of the work alone.  Remember Dear Hubby wanting to stay and help?  Might be a good thing we didn’t mention that to Mike.  He might have taken him up on it and we’d still be in Illinois farming the land.

And I have a JSS Retreat calling me!  It’s about time I got back to quilting, dontcha think?  But I digress….. 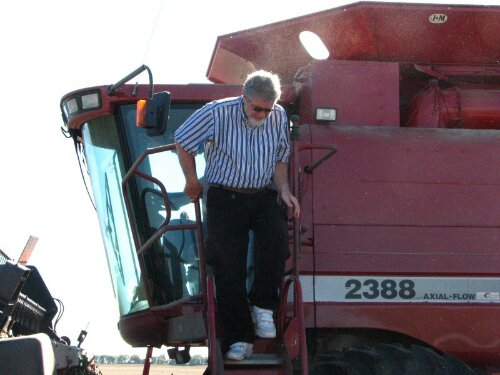 Here’s Dear Hubby climbing down after his ride along.

And here’s what it looks like as Mike offloads the beans into the wagon.  We decided the beans look like Kix cereal!  And now I’m hungry.  Doesn’t take much, does it?  All that farm healthy eating.  Minus the healthy part.

Here’s what the soy bean pods look like when ready for harvest.  Kinda hairy, aren’t they?

And the sign at Farmer Mike’s Dad’s place.  A great photo op, right?

The next day we were on to the pig pens with Farmer Herb!  My Dear Bro-in-Law.

This is Farmer Herb with his buckets of corn to slop the pigs.  Although kernels of corn don’t really slop much.  Wonder why they call it “slopping” the pigs?  Hmmmm…. should have asked that question.  And look at the cool old concrete silo in the picture.  There’s a lot of history at this farm. 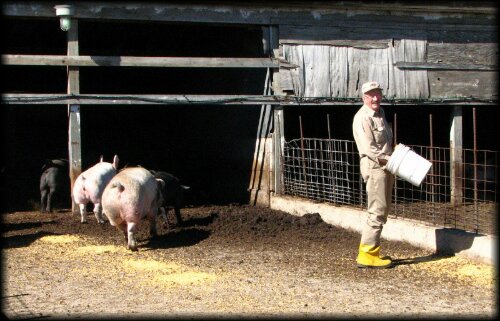 Hi Herb!  How are the piggies today?  Don’t you just love his pig sloppin’ boots?  I’m told if he dropped dead of a heart attack in the pig pen that the pigs would just eat him.  Perhaps that’s a little TMI for the blog?  But I’m going to be praying for no heart attacks or anything else that might trip Farmer Herb up in the pigpen!  Apparently there is no loyalty to the hand that feedeth the piggies. 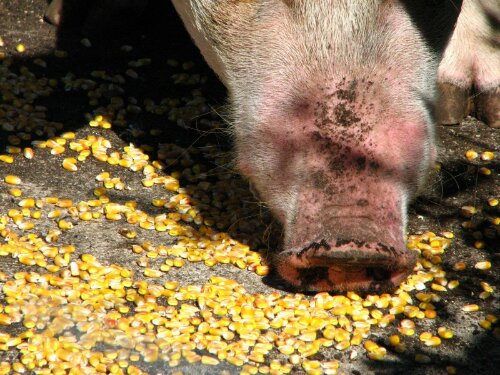 Look how dirty their noses are.  They do some serious rooting around in the muddy parts of the pigpen.

Hi Piggies!  Please be nice to Farmer Herb when he’s in your pen, OK?

Dear Hubby even touched a piggy nose.  And washed his hands for exactly 12.8 minutes afterwards.

Well, hi there, Babe.  And how are you today?  She didn’t answer, by the way.

There were a couple of baby piggies too.  Farmer Herb isn’t really into the pig-fattening-up-for-market selling business anymore.  But I’m not sure he’d know what to do with himself without a few pigs to slop every day.  So he keeps a few “pets.”  Who would eat him if given half a chance.  Some pets.  I’ll stick with kitties, thank you very much. 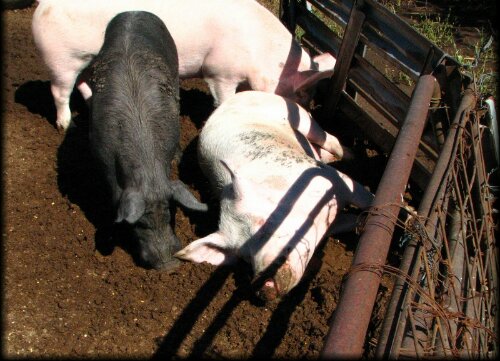 And just before we left, this pig rooted around in the mud with her nose for a bit and then just plopped down in it to cool herself.  They really are stinky, messy animals.  Still enjoying that bacon today, are ya?  I think I’ll make my BLT’s into ALT’s forevermore.  I’d rather have the avocado anyway.

So that’s life on the farm.  As I’m typing this we are traveling down the road for home – just crossed the Oklahoma State line!  Only one more state to go.  The trees are mostly green now.  With a red one now and then.  But the temp is still a cool 63 degrees at 11:30 a.m.  Must have had a cold front come through the area.  Because it was nice and warm as we passed through St Louis yesterday.  Just as the NLCS game began.  That’s baseball for you unenlightened non-sports folks out there.

3 Responses to Down on the Farm