Last week we had our “It’s OK Sampler Part 2” class so I thought it was worth a revisit to the bloggie awards.  Even if I did have comments about the awards being rigged the last time.  Something about it being all about “no child left behind” or some such nonsense.  Sheesh!  Just because everyone got an award doesn’t mean that everyone deserved an award.  And I reserve the right to reward or not reward.  After all, it is my blog.  And since there are no prizes, I feel the urge to reward away!  Rewards, rewards and more rewards.  Or is that awards….hmmmmm.  Maybe it was ‘A’wards last time and ‘RE’wards this time around?  Guess it doesn’t matter what we call it – there are still no prizes.  I mean after all, this blog is only a little over 2 months old.  I am not The Pioneer Woman, people!  I don’t have millions to start throwing around prizes.  You’ll just have to cope.

On with the show!

Best Double Irish Chain/Churn Dash Centers…..  you guessed it.  They are ALL winners! 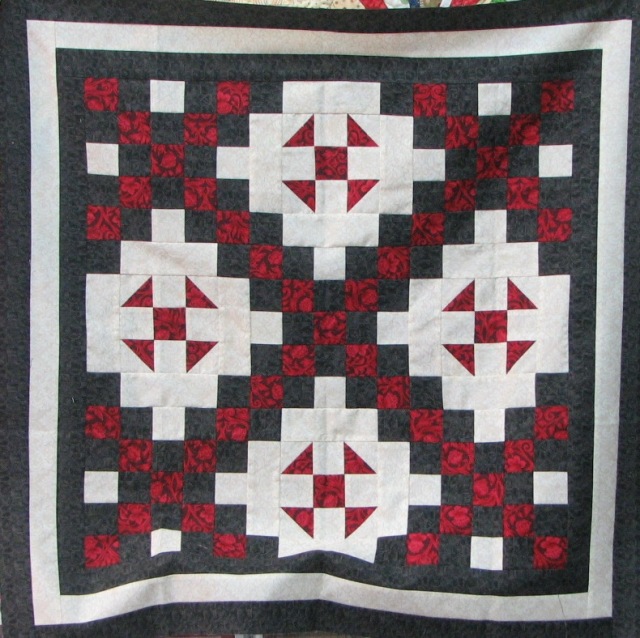 Sue O’s – love the red with the charcoal/black….. very striking! 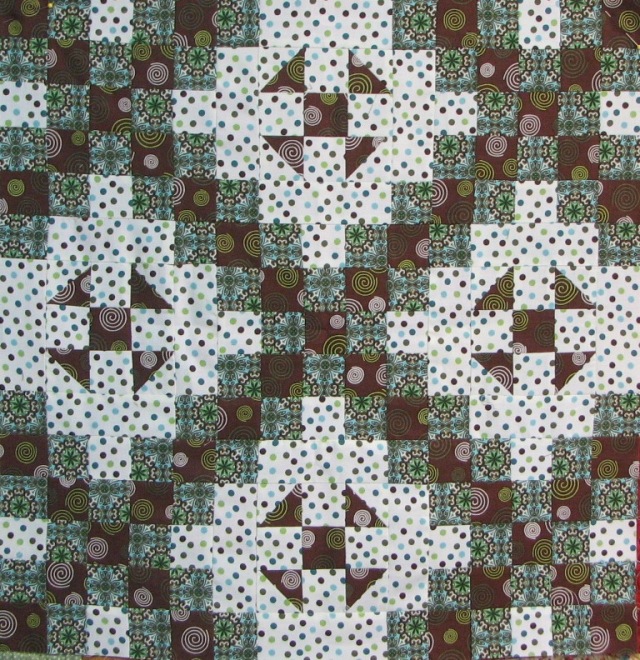 Cindy’s – can’t wait to see her log cabin blocks too.    Hers are going to be very different from the rest of the group.  Guess I’ll have to follow up on these pics, won’t I?  I’m always open for more blogging material. 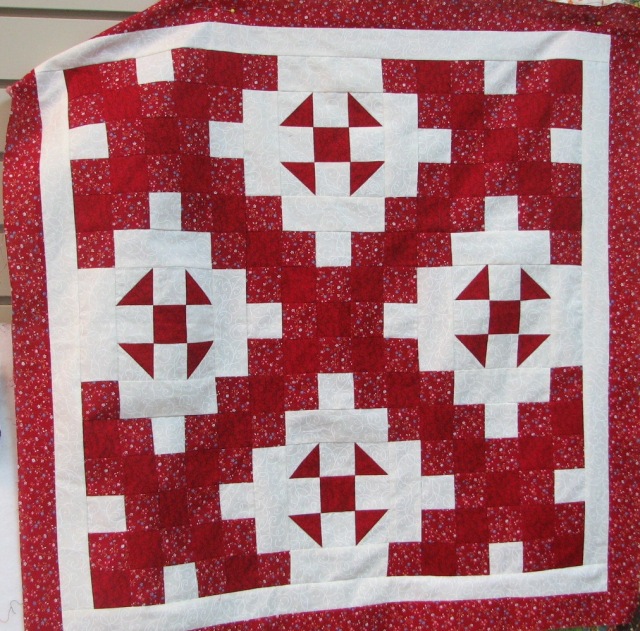 Patti’s – nice red, girl!  I love red.  My favorite color.  This will be a happy quilt. 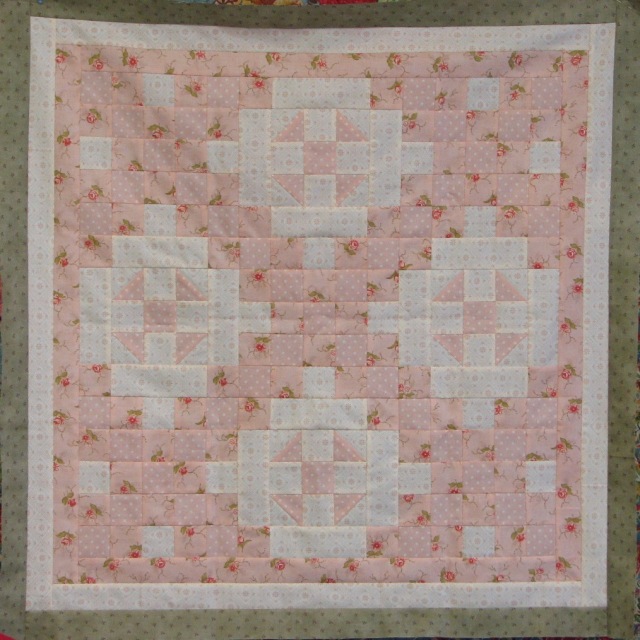 Sally’s – quite a contrast from the bold colors above, isn’t it?  Sally’s a pink kind of gal…… soft pink. 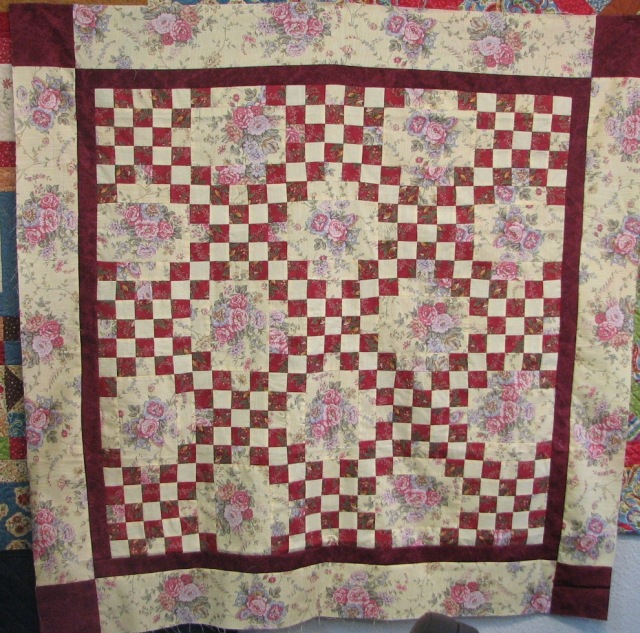 Judy’s – OK, so she doesn’t have any churn dash blocks.  She gets an award anyway because hers is bigger.  And it’s pretty.  And because I said so. 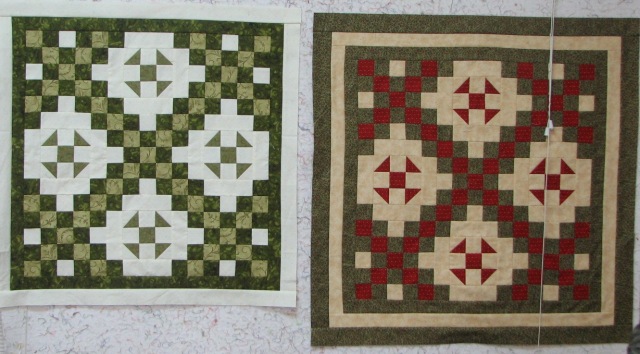 Karen’s (left) and Pam’s (right) – I love both of these.  And not just because I helped them put together the fabric selections either. 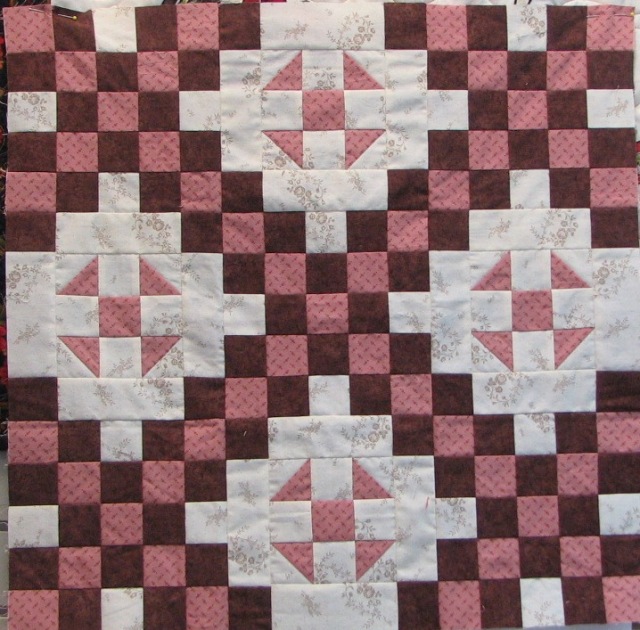 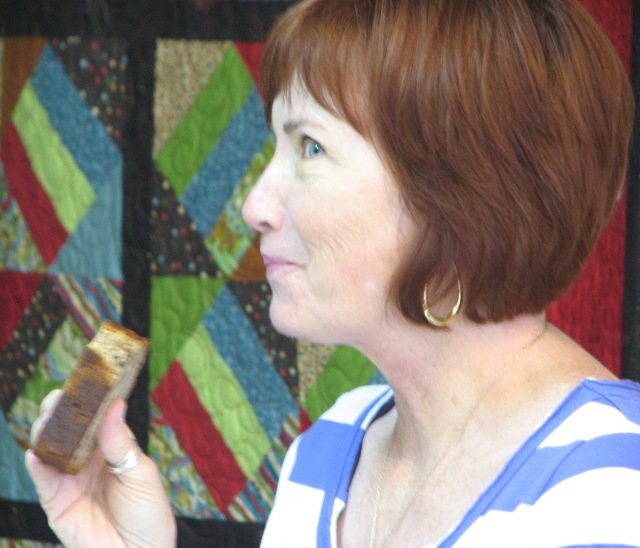 Now come on……. did you really think this could go to anyone other than Cindy? 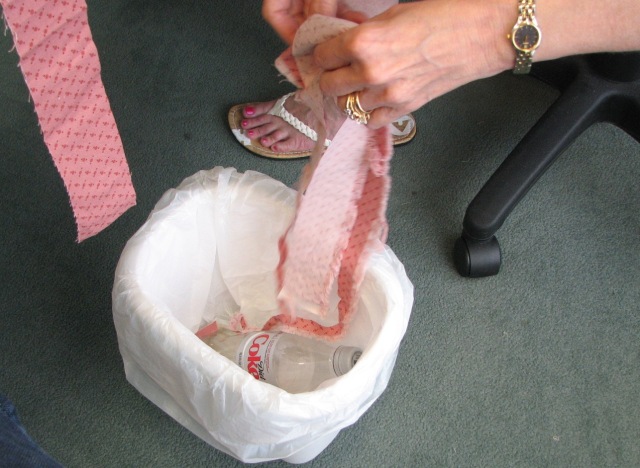 That’s our sweet Sally, pulling my scraps right out of the trash can!  I guess you can’t really call it stealing when they were in the trash.  But Best Use of Fabric doesn’t work either since she hasn’t technically used it yet.  Keep an eye out for this pink in her next Ribbon Winning Quilt at the Quilt Show in September.  She’s sneaky, that Sally girl.  And if she wins an award with the quilt she makes, I’m gonna claim part ownership.  It was my fabric, after all. 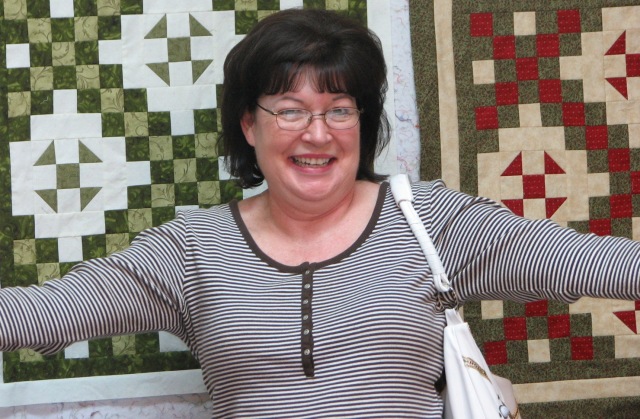 Can you believe Madelyn crashed the party again?  She had such fun the first time around she decided to return for The Award Part 2.  You party animal, you. 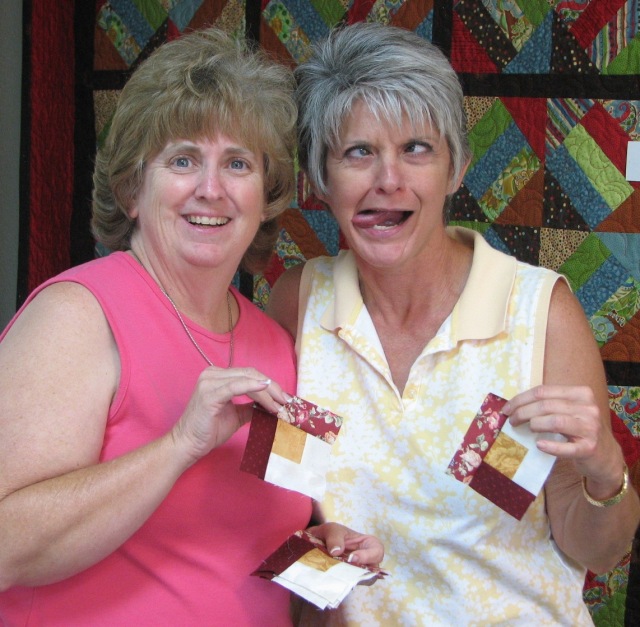 Karen got all spruced up with a new hairdo just for the blog!  Doesn’t she look cute?  And Pam was trying to keep up with the small gals in the blog on July 1st.  Looks just like Grace, doesn’t she?  And her hair is pretty cute too, but not quite as cute as Karen’s.  And Karen’s great smile could never have put her in contention for the Silly Face Award. 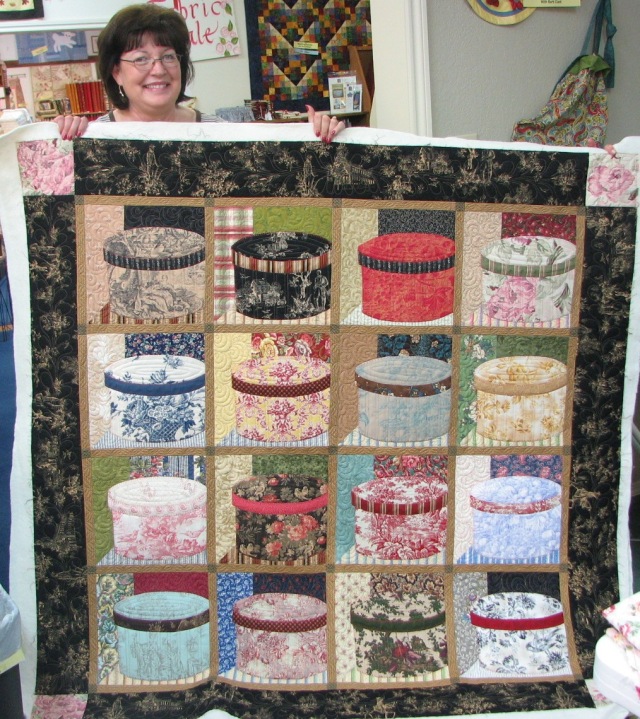 What’s a party crasher without a little show ‘n tell along?  Madelyn’s hat boxes very nearly came directly from the quilter to show us.  And they are grrrrreeeaaaat!  (Picture Tony, the Tiger here.) 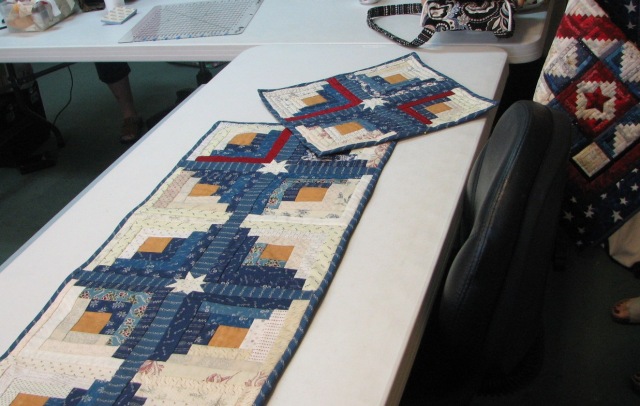 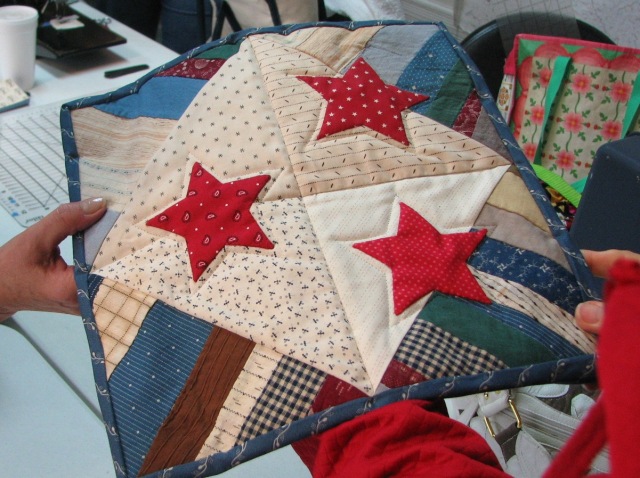 ……Judy!  This one is for a silent auction donation to the guild.  Cute, Judy!  And I know what you’re thinking, but I couldn’t very well call these Show ‘n Tell Awards!  That award was already taken.  Give a blogger a break. 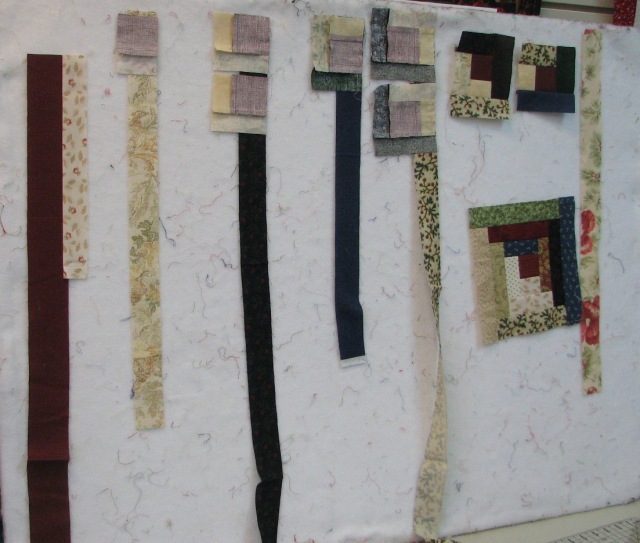 Beverly!  OK, OK – so it was the only sample board.  That doesn’t mean it wasn’t the best one!

And finally……… Best Shirt with Coffee Cups on It … (Go ahead – just try to guess who won this one.) 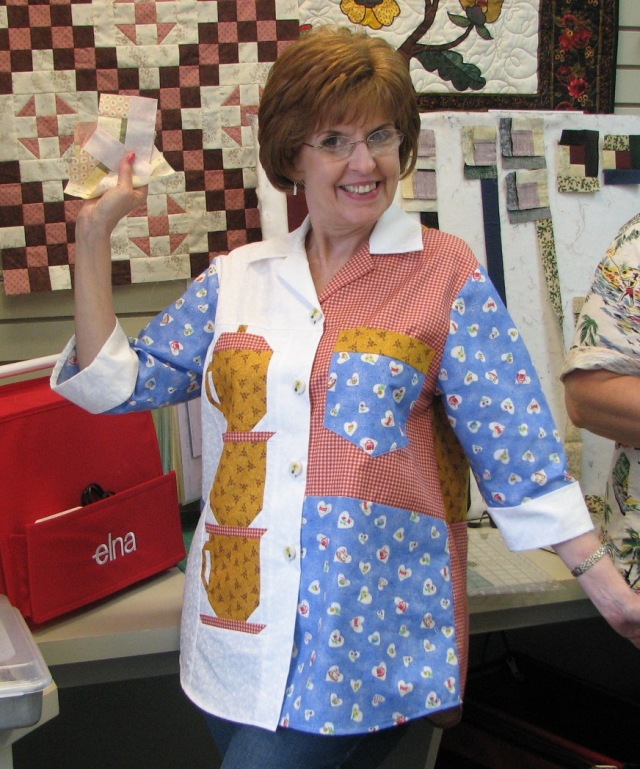 Sally!  You didn’t guess, did you?  It was really tough to guess, I know.  But now you know that she is the absolute Queen of Shirts.  And I want one too…… she’s going to have to teach me how to make one!

That concluded our “It’s OK Sampler” class.  Hopefully the finished quilts will show up at a JSS Bee gathering one day soon so you’ll see them in their completed stage.  It was a very fun class!

All Awards are semi-final.  No fabrics or quilters were harmed in the making of this blog.  All rights unreserved.  Prizes furnished by…..oh, yeah.  There are no prizes.  Prizes?  We don’t need no stinkin’ prizes.  (Quick!  Name that movie……)