Day One.  That implies that there will be a Day Two and Day Three, doesn’t it?  The way blogging has been for me lately, I wouldn’t hold my breath if I were you.  But I’ll do my best!

The good news is…. in Alaska in the summer, you get two days for the price of one!  Actually, if you wait until it gets dark outside to go to bed, you’ll never go to bed.  It’s 11:45 pm as I’m writing this and still bright as day outside.  Pam looks out and says, “It looks dark to me!” but I told her you sure wouldn’t need a flashlight to walk around out there.  And even with the blackout curtains drawn in the bedroom last night, there was always a halo glow around the edges of them.  So with all that extra daylight time on my hands, you’d think I’d have time to post a blog every day, wouldn’t you?

No Alaska trip would be complete for me without a trip to the dog kennel of GB Jones.  The last time I was at the kennel was in 2008 for the Iditarod so things had changed quite a bit out there!

And there’s GB himself, walking up the path to greet us when we arrived!

The first thing that’s really different about the kennel is there’s a cabin there.  With electricity.  And internet.  Oh, my.  GB has come a long way since I first met him in 2007. 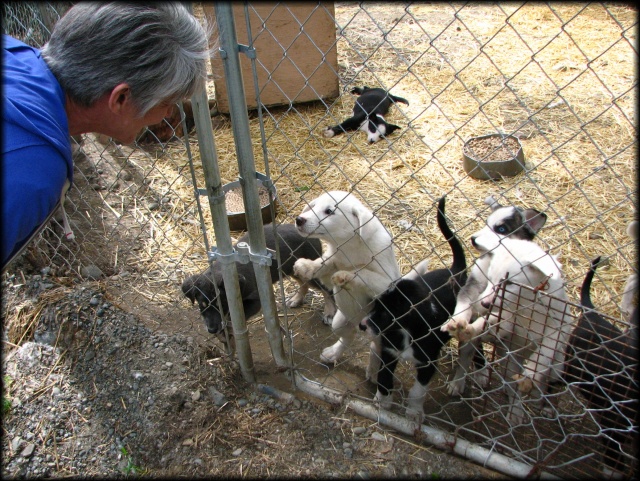 And there are puppies!  Lots and lots of puppies.  The cutest puppies you can imagine.  Complete with puppy breath.  And energy.  Except for that one lonely guy in the background…..

I think he must have had a hard day.  It’s tough being a puppy in the world, dontcha know?  A puppy’s gotta have naptime too.  Resting up so one day he can run with the big dogs.

Pam and I had to have the obligatory picture with each of us holding a puppy.  It’s mandatory.

Isn’t this little guy cute?  With the bluest eyes you ever saw.

He snuggled right up to me and it was all over for me.  I carried him around for the rest of the day.  And the longer I held him, the cuddlier he got! 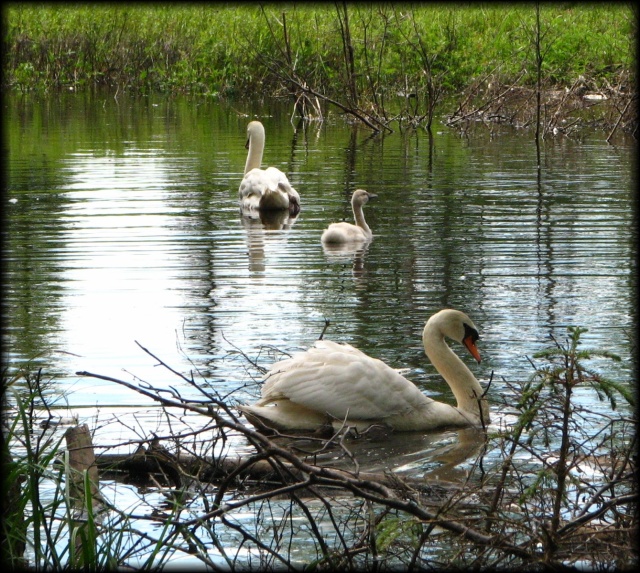 There are also swans at the kennel!  Including a baby swan who has grown a lot from the first time I saw a pic of him on facebook.  Aren’t they pretty?

And a little baby dove…. born just hours before we showed up at the kennel today.

This is Kim.  She has the bluest eyes you ever saw – only they don’t show quite the blueness in this picture.  She is going to be moving in with Pam as soon as Pam gets a fence around her property.

Here’s a pic on the Alaskan Wall that brings back a flood of memories of our fabulous adventure in 2007.  Do you recognize those Texas gals? 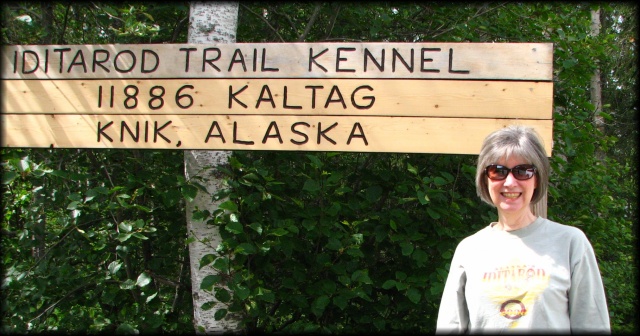 What fun to be at the Iditarod Trail Kennel again!

And I was almost successful in sneaking this cute little guy home with me. Aren’t those eyes just killer blue?

This is a commonplace view as you drive down the road in Alaska. I think the people here just take the mountains for granted. But I wanted to snap a picture as we rounded every corner! Such a tourist I am.

Where else but Alaska would you have a grocery store named Three Bears?

When we got back to Pam’s place tonight we took a long walk around her property. And she pointed out native trees and other special things.

Like moose droppings in the woods on her property. I thought they looked just like pecan shells. 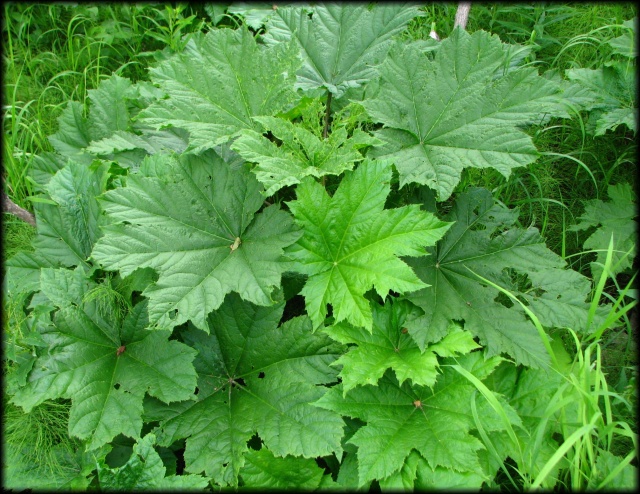 She also made a special point of showing me this very prickly, very dangerous weed that grows all over.

Because these are what the thorns look like that are hiding under all that pretty greenery. Oh, and I may have a few mosquito bites after our little stroll through the woods.

After dinner, Pam’s friend, Kay came by with her sweet granddaughter, Faith, who is visiting from Michigan. They came by because we called to tell them about a very special visitor who also dropped by after dinner and they wanted to meet him. 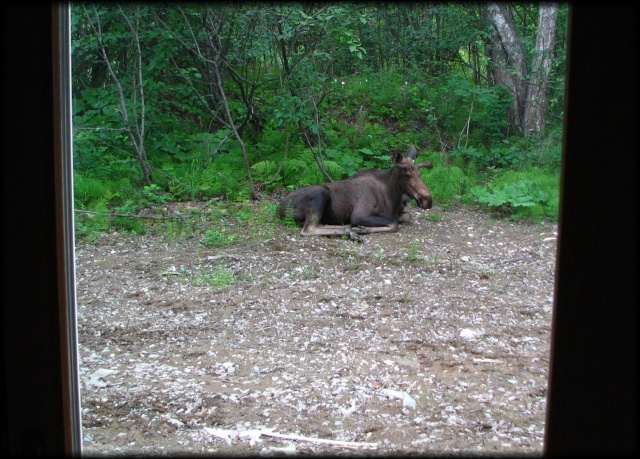 Meet Bruce, the Moose! Hey, when it’s the very first ever moose who drops by to hang out for 2 hours in your backyard just a few feet from the windows, the least you can do is give him a name! Isn’t he just the cutest? Actually, I think he’s so ugly, he’s cute. If that makes any sense at all. And it’s pretty exciting when the dogs are going crazy in the house and you try to quiet them, only to then go crazy yourself when you discover exactly what it is they are barking at. Bruce the Moose has come for a visit. Pam and I even thought we might need to throw together a quilt for him so he could spend the night. But he eventually sauntered away into the woods.

But only after he’d had a photo op through the window of 3,268 pics between the two of us and our various electronic devices.

Aren’t you happy I decided you needed to only see two of them?

This entry was posted in Alaska, vacation and tagged Alaska, dogs, moose, mountains. Bookmark the permalink.

12 Responses to Alaska! Day One