Border Crossing and “That Lady in Toronto”

You know her.  There is one in every country.  The one who serves on the welcome committee to make you feel right at home in your new country.  Not.  Actually she’s more like the reminder that this ain’t Texas any more.  Even though I’m sure there’s at least one of these in Texas too.

And she will forever be our Measurement of Irrational Behavior.  And she gives us a laugh over and over again.

But I’m getting ahead of myself. 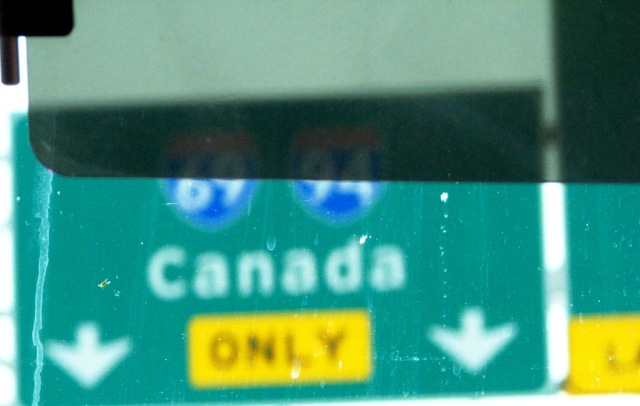 We were on our way to Canada!  And we had a border to cross.  Sorry about that blurry picture.  Apparently the camera thought it more important to focus on the dirty, rain-splattered window than the sign behind.  Silly camera.

I should mention here that Dear Hubby has an unreasonable fear of border crossings.  Something about nightmares from an encounter with a previous border guard with spiky red hair and a gun on her hip that have aided this phobia of his.  Maybe I’d be afraid too, if I’d met aforementioned spiky red-haired girl with a gun.  Who told him no the last time he wanted a visa in Canada.  Nightmares, I tell ya.

Suffice it to say that although I was anxious to get the border crossing behind us and get on with our Canadian Adventure, on this particular morning Dear Hubby was stalling.  I didn’t have the information that Dear Hubby did that arriving at the border at precisely 11:00 a.m. on a Sunday morning would be the good luck charm that would breeze us through with all the needed paperwork and visas in hand.  Silly me.  I just thought we’d hightail it to the nearest border crossing the minute we jumped out of bed that morning.  But no.  We had to drive to a different crossing because we couldn’t arrive too early.  (Change of shifts for border guards, dontcha know.)

And we had to stop at the rest stop just before the crossing so Dear Hubby could shower.  Because being squeaky clean before you approach a border guard is a good thing too.  And aids in the good luck charm that you need.  I should also mention that he had to have a fresh haircut the night before.  Which we accomplished in the parking lot of the rest area where we spent the night.  And we nearly had a line forming of others who wanted haircuts too.  I wonder if they were crossing the border and had the same information that Dear Hubby did?  Hmm……..

At one point in the morning, I asked Dear Hubby if he was stalling.  His reply?  Yes, I suppose I am.  At least he recognized what was happening.  The result of all those nightmares.

Finally we got to the border.  And Dear Hubby might have been onto something there about timing.  There was a very short line of cars!  For which I was grateful.  I don’t think Dear Hubby would have lived through the anxiety of the wait once we finally arrived at the border.

That’s us!  RV line!  Please disregard the unhealthy snacks sitting in the window.

The view from the bridge just before the crossing.  It was a very high bridge.  Nice view.

The flag of the country of our summer home.  Greeting us.  Notice the sign to the right.  And the new language by which we are now surrounded.  Did I mention that I am too old to learn a new language?

I don’t think you can read it, but it says “Welcome to Canada” on the sign above the gates.  And we breezed right through these gates like nobody’s business.  The gal there wanted to know what all we brought with us.  Really?  Do you want me to name everything we have in here?  Do you know what kind of storage this thing has?  I did not say any of those things to the nice border guard.  I’m no dummy.  I just told her we had household goods, food and clothing.  And two cats.  And Panda and Boo breezed into the country too.  They didn’t even ask to see their paperwork!

But then, because Dear Hubby needed a work visa, we had to pull forward to the building you see ahead on the right.  Sweaty palms and all, for Dear Hubby that is, we entered that building.  Thank goodness no one inside had spiky red hair.

And within an hour, we were on our way, paperwork in hand.  The guard was very nice, even though the only smile he cracked was when I mentioned that I was just along to escape the Texas heat.  And cook dinner.  I mostly kept my mouth shut.  Cracking jokes with the border guard would have sent Dear Hubby right over the edge.

And then it was on to Toronto.  And the Head of the Canada Welcome Committee.

By the way, I should point out here that if you want to meet up with some friends who happen to live in Toronto, do not, I repeat not, plan to meet them at a shopping mall.  In Texas, with the exception of Christmastime, our big mall parking lots always have plenty of room for turning around a big motorhome pulling a car.  And is an excellent place to plan to meet up with someone for a brief visit as you pass through town.  Not so in Toronto.  First of all, the parking lots were very nearly full to overflowing.  And second?  They have dead ends.  Where even cars ahead of you have to back up and turn around in a very tight space to get out of said dead ends.  Did I mention we were towing a car?

And that’s where we encountered the lovely Welcome Committee Chairwoman.  In one of those cars that had just backed up and turned around.  We did not get all the way to the dead end.  But we did get far enough that unhooking the tow car and backing up was going to be necessary to get out of the predicament we were in.

And (horrors!) we were blocking the Chairwoman’s path.  Only actually her path was blocked by the van next to us.  Who insisted on blocking everyone’s way in order to be smack dab in front of a certain door.  A nice good Samaritan finally convinced her to move a bit so cars could get through until we could get our car unhooked and back up the motorhome.

But in the meantime, the Chairwoman was yelling all kinds of things out her window.  I asked her what she wanted us to do?  She actually wanted us to pull forward more where we really would have then blocked her in totally.  I apologized and told her we would have to unhook our car that was behind in order to get out of the way.  And I told her I’d never seen a Mall with dead ends in its parking lot.  But then again, I guess I’m just a hayseed from Texas.  At least that’s what she thought.

She was very irrational.  And apparently in a big fat hurry.  She even walked by after she parked her car and continued to yell how stupid we were.  Yeah, we know.  We were feeling pretty stupid without her telling us.  Welcome to Canada.

After we finally got turned around and found a place to park, a security guard drove by to tell us it had been reported that we were yelling obscenities.  Really.  I thought we were pretty calm and rational.  And I told the guard that I promised there was no swearing coming from us.  My friends can attest to the improbability of that.

But all turned out well.  We had a lovely visit with our friends, Cathi and Bob, in the motorhome in that parking lot.  For about three hours.  We waited for the Mall to close and all the cars to leave and then drove the car around to plan our way out.

And then it was on to Montreal!  Where our summer home awaited us.

And where we hoped the Welcome Committee was much more inviting.
Hugs,
Barb, 70 degrees and sunny

This entry was posted in just stuff and tagged Canada. Bookmark the permalink.

17 Responses to Border Crossing and “That Lady in Toronto”