Lanelle had a big surprise for us at our recent JSS Bee gathering.  She brought out a bag and began walking around the room, handing out blocks to each of us.

I especially love the look on Cindy’s face.  I think she was shocked with her good fortune of the day.  She had already hijacked Susan’s giveaway winnings (see the Aug 28th blog) and now she was just certain that Lanelle was giving us all a gift.  Either that or she was just blown away with the workmanship on the block she was handed.  All of our jaws dropped to the floor to think that Lanelle had pieced such blocks.

But Lanelle, as evidenced by the wiping of her brow, assured us that her blood, sweat and tears had gone into these blocks.

Look at the face on that little racoon!  Incredible piecing.  Unbelievable blocks.

And they just kept coming…… 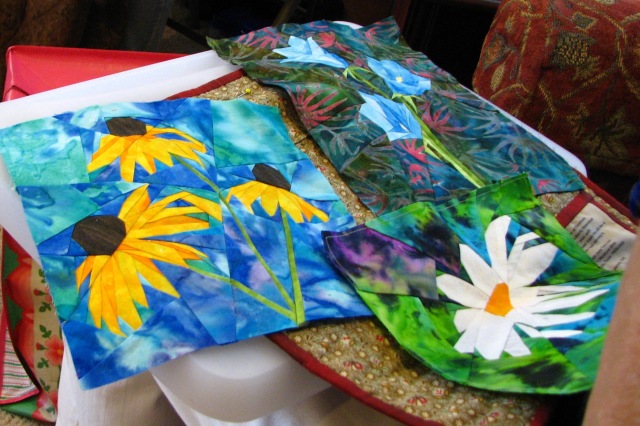 What?  Lanelle made all these and kept them a secret?  Lanelle, where have you been hiding these?

Soon our looks of shock and awe turned into disbelief.  Our Lanelle made these?

And our Lanelle could keep up the pretense no longer.  She finally confessed that they were all made by a former JSSer, Vicki!  Vicki moved away from Texas to……… North Carolina?  South Carolina?  One of those states on the east coast.  Not sure which one.  She left us several years ago never to be heard from again.  Well, last week she was in town visiting and, although she was unable to come to the Bee and visit that day, she sent the blocks with Lanelle.  And Lanelle tried to pass them off as her own.  That trickster Lanelle!

Aren’t these blocks amazing?  Unbelievable detail in each and every one…..

We were all amazed at how exquisite each one was.  And can I just say…. nice nails on the models too…..

I purposely didn’t include these in the show ‘n tell blog yesterday.  I thought these special blocks deserved their very own day. 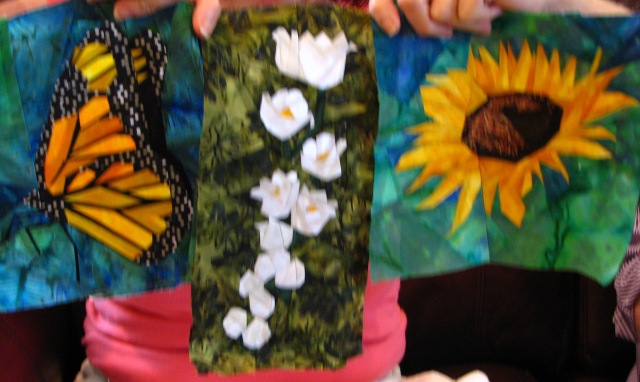 And you absolutely have to see each and every one.  Blurry pictures included.

It took us the rest of the day to pick up our jaws from the floor.

This quilt is going to be a show-stopper for sure.

I hope that someone is sending the link to the blog to Vicki.  Because I have something to tell her.  Vicki, you are absolutely forbidden from sending any quilt blocks to JSS Bee ever again!……..

……. unless you hand carry the blocks to Bee yourself.  We miss you, Vicki and would sure love to see you!

We’re all hoping that if you come and rub shoulders with us, some of that amazing paper piecing talent will rub off.  Thanks for sharing through that crafty Lanelle.

Texas hugs all the way to one of those Carolinas,
Barb

16 Responses to Paper Piecing with Lanelle